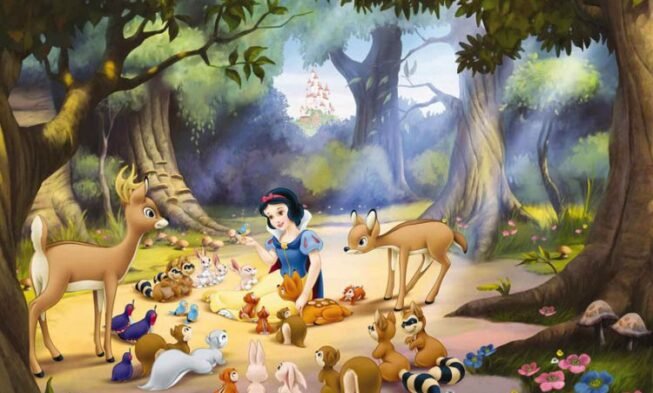 This is one of the most famous stories to read for kids, Snow White and the Seven Dwarfs Story. Snow White and her prince lived happily in their castle but ever since she’d left the Dwarf’s cottage, she tried to visit them as much as she could. One spring day, she paid a visit, planning a very special surprise. Snow White knew the Dwarfs worked hard and that day she wanted to make sure that when they got home they wouldn’t have any more work to do – no dusting, no sweeping, and no cooking. She waited until the Dwarfs left.

Then Snow White and her animal friends hurried into the cottage. The princess looked around. “By the time the Dwarfs get home tonight, our surprise will be ready.” Right away, they set to work. Snow White sang a cheerful song as she swept the cottage floor. The birds picked up crumbs and the squirrels used their fluffy tails to dust. The chipmunks and the deer washed and dried the breakfast dishes. With so many helpers, Snow White had the downstairs gleaming in no time at all. 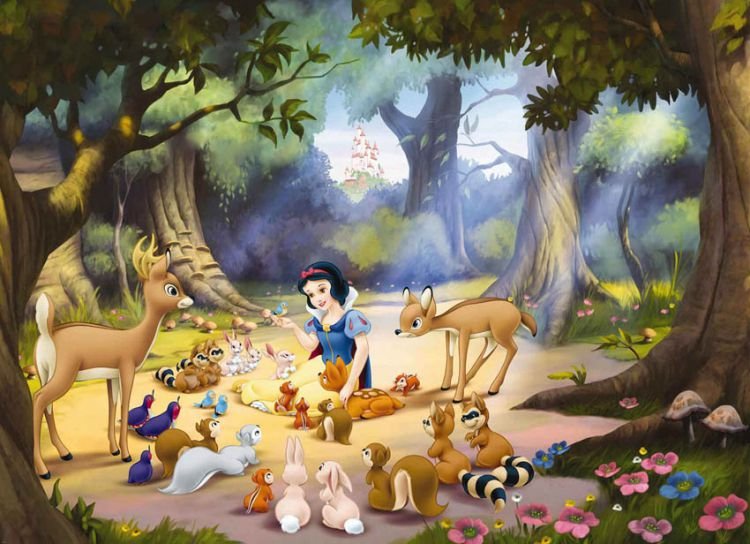 Next, they went upstairs to make the seven little beds. “Pull the covers up tight!” the princess told the bunnies. “Then fold down the top. There, it’s perfect! You did a wonderful job!” Soon, the cottage was all tidy, and Snow White headed outside. She knew that the Dwarfs would be hungry after their long day. Luckily, the blueberry bushes were full of ripe fruit. “We can make the Dwarfs blueberry pie for dessert!” Then the princess and her friends strolled into the meadow to pick some flowers. “Lovely!” said Snow White as she sniffed a blossom. “These will make their table so very pretty!”

Back inside the cottage, Snow White and her friends got to work fixing supper. There was soup to be simmered, bread to be made, and pie to be baked. Before she knew it, the sun was low in the western sky. Tweet! Tweet! Chirp! Chirp! A bluebird sang outside the window to tell Snow White that the Dwarfs were almost home. Snow White ran and hid outside and peeked in through the window. She watched the Dwarfs walk in and stop and stare. The floors were swept, the room was tidy, there was even a fresh pie cooling on the windowsill! You may also like to read, The Frozen Elsa Story.

“What is that delicious smell?” Doc wondered. “Look!” cried Grumpy. He pointed to the table which had been set. Then he went to the pot of soup. “Someone’s been in our house!” The Dwarfs were confused. They tried to guess which Dwarf had done it all. Doc noticed that Happy’s smile was especially big. “Was he keeping a secret?” Doc wondered. Dopey pointed out that Sneezy seemed supersneezy. Was it because he had dusted and swept the cottage?

Snow White giggled and listened outside the window. “They’ll never guess that we did it,” she whispered to her animal friends. And when the Dwarfs began to eat the pie, Snow White quietly headed home. Inside the cottage, Bashful had one more guess. Whoever was behind the surprise would have to be one tired Dwarf! And who seemed the sleepiest? Why, Sleepy, of course!

The truth was Sleepy wasn’t the only one. After a long workday, and with their tummies pleasantly full, all Seven Dwarfs were ready to go to bed. And so, they made their way upstairs, where they found one last treat. Seven neatly made beds and seven perfectly fluffed pillows. The Dwarfs had one thought as they drifted off to sleep: They had to tell Snow White about this wonderful surprise the next time they saw her! Also, read The Snow Queen Story.

Here is a visual depiction of, Snow White and the Seven Dwarfs Story. See the video story below,