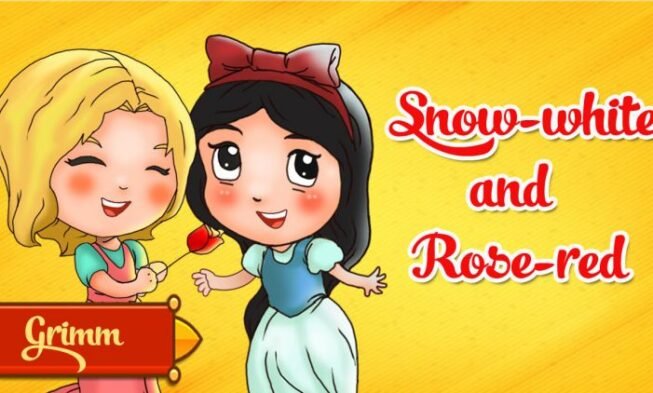 Snow White and Rose Red story are about two sisters living in a cottage in the forest who are told apart by their hair color. Snow White is blonde, and Rose Red is a redhead.

This is the famous Snow White And Rose Red Story for kids. Once upon a time, there was a poor widow. In front of her small cottage, there were two rose trees- one of them flowered in white and the other in red. The widow had two daughters- one of them was called Snow White and the other one was called Rose Red. They were good and quiet children, singing sweetly in choirs like no other two girls in the world. Although they were sisters, Snow White was the quieter and gentler one. You may like to read SNOW WHITE AND THE SEVEN DWARFS STORY – DISNEY STORIES

In the summer, Rose Red would wake up early and do the housework. Then she would pick white and red roses and leave them next to their mother’s bed. In the winter, Snow White would light the fire. Their mother would ask Snow White to lock the door and then the girls would gather around their mother, who would put her glasses on and would open a thick book to read from it. The girls would listen and a young goat would curl up with them on the floor. 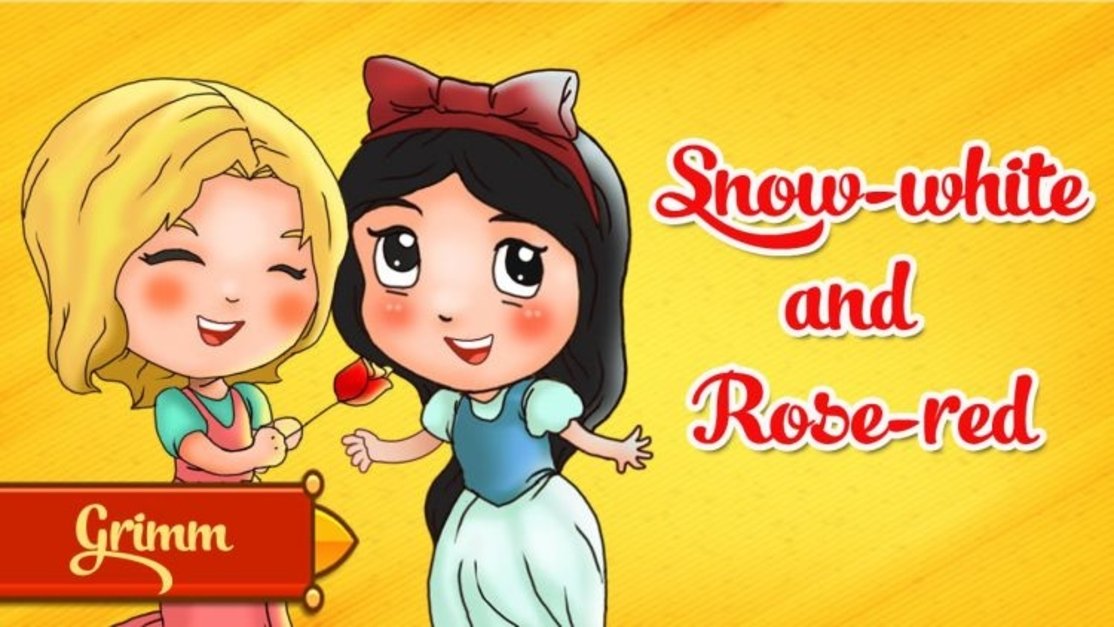 One winter’s evening as they were doing just that, someone knocked on the front door. Snow White unlocked the door thinking that it would be some homeless man freezing in the cold. But it wasn’t a man! Snow White screamed in fright when she saw the bear. Rose Red was also scared and hid behind her mother’s skirt. The goat bleated in terror. But the bear extended his paw in greeting. “Don’t be afraid kind ladies, I won’t harm you! I’m just really cold and I’d like to warm up if you let me in,” he said.

The three women looked in amazement and fear at the talking bear. Soon their mother told the girls to calm down and help the bear get rid of the snow he had on his coat. The girls did as their mother told them. Feeling warm from fire, the bear fell asleep and everyone went to bed. This continued through the winters and the girls were so used to playing with the bear in the evening and to have him at home that when summer came and the bear had to leave, they were all very sad. The bear had to go into the woods where he kept his wealth hidden from the evil gnomes.

This continued through the winters and the girls were so used to playing with the bear in the evening and to have him at home that when summer came and the bear had to leave, they were all very sad. They hugged and bade each other farewell.

One day, the mother sent the girls into the woods to gather firewood. As they were walking, they came across a big tree which had fallen across the path. On the tree, there was a little man with a long beard which was stuck under the tree. The gnome was trying to pull out his beard but with no success. Snow White took a pair of scissors out of her pocket and cut the end of the dwarf’s beard. He got angry and left without even thanking her. You may also like to read, Snow White And The Seven Dwarfs Story – A Big Surprise.

The other day, the girls decided to go out to the river to catch some fish for dinner. When they approached the river, they found the same dwarf trying to pull out his beard from a big fish’s mouth. The girls tried to pull him. At last, Snow White had to cut off a small part of his beard. The dwarf took off his bag which was full of gems and left without saying a word.

One day, they saw that the bear was chasing that dwarf and all the jewels fell down. Soon, the bear ate him up. It was the same bear who stayed at their house. In that very moment, the bear turned into a handsome Prince. The dwarf had stolen his treasure and cast a spell on him. Snow White married the Prince and Rose Red, his brother. They lived at the castle and took their mother along with them. They lived happily ever after.

Here is a visual depiction of, “Snow White And Rose Red Story”. See the video story below,