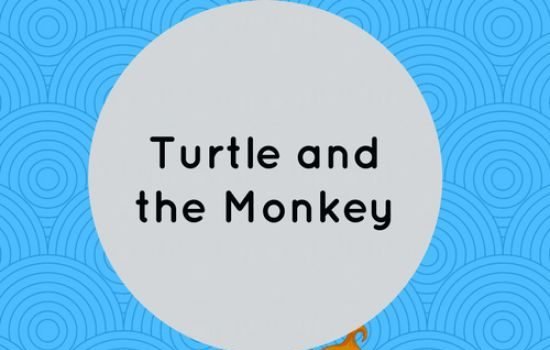 This is The Monkey And The Turtle story for kids, which has been adapted from a Filipino folktale. One day, a monkey stood by the river and watched a turtle, who was busy pulling a huge tree against the river’s tides. “What is this turtle trying to do?” the monkey wonders. Soon, the turtle makes it to the shore, lugging the tree behind him. Also, read Hare And Tortoise.

The poor turtle had become tired. “What are you trying to do?” the Monkey asks the turtle. “I found a banana tree, and then I thought I should plant it somewhere,” the turtle explains. “Monkey will you help me? This tree would grow and bear many sweet bananas. We could share them.”
the Monkey and the turtle
At once, the Monkey agrees. The Monkey was quite greedy and knew he would get many bananas without doing much work. “So, tell me, how can I help you?” the Monkey asks. “Let’s drag this tree to a clearing, where we can dig a hole and plant it.”
The turtle pulled the tree from one end, and the Monkey pushed it from the other. The turtle got the heavy end; he pulled the roots and the trunk. Whereas the greedy Monkey, who only wanted the bananas and no work, only held the top of the young banana tree, which wasn’t even heavy!

When the turtle wasn’t looking, the Monkey would jump onto the banana tree leaves and let the turtle pull his and the tree’s weight alone. Soon, they came to a clearing and agreed to plant the tree there. While the turtle dug a hole, deep enough for the banana tree’s roots, the Monkey stood and watched. Also, read The Tortoise And The Eagle.

After the turtle dug a hole, he pulled the tree into the hole and pressed the mud around its trunk. “Now, all we have to do is water it and remove the harmful weeds. And soon this tree will grow and bear many fruits! We will share the sweet bananas.”

The turtle was left with the trunk, but the wise turtle knew it would soon grow into a beautiful tree and bear any fruits. So, the turtle worked hard, and the tree bore the result of the turtle’s hard work. On the other hand, the Monkey’s tree withered and wilted, and dies. Well, it wasn’t even a tree, for the Monkey had run off with the topmost part, which had no roots. And so the Monkey became jealous, “Why should the turtle have bananas?” he wondered angrily.

Then the greedy and lazy Monkey went and ate all the bananas from the turtle’s tree. When he was done with the banana, he would toss away the banana skin onto the turtle’s shell. At this, the Monkey would laugh and continue eating another one. The turtle, tired of the Monkey and his foolishness, went and brought some thorns. “The monkey is surely going to come down this way,” the turtle smiles and places the thorns around the trunk of the banana tree. And when the Monkey climbs down the tree after filling his stomach, his feet fall on the thorns. “What is this!” the Monkey yells in pain.

After picking out the thorns, the Monkey decides to teach the turtle a lesson. “I will throw you off a cliff and make sure you fall on the rocks and break your shell! And if that does not happen, I will climb a mountain of fire and throw you into the flames!” The turtle did nothing; he only smiled and said, “Do as you please. But whatever you do, please do not throw me into the river.” Also, read The Clever Tortoise.

The foolish Monkey did exactly that; he picked the turtle up and threw it into the river. “Now you shall die, horrible turtle!” But in a fit of anger, the stupid Monkey had forgotten that the turtle’s loved to swim more than anything in the world. So, when the Monkey threw the turtle into the river, the turtle swam away. And the banana tree? Well, the weeds took over the tree, for the Monkey was too stupid to know how to take care of it. Ever since then, the turtles and the monkeys have been sworn enemies!