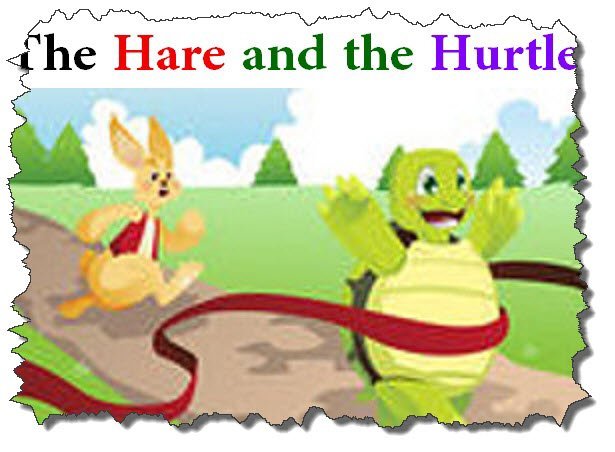 Besides being very convinced, the hare Rosita also liked to make fun of others, and as soon as she saw the turtle, she would soon start laughing at her, calling her old, slow and other names much worse!

On a hot summer afternoon when the beasts of the woods were all gathered beneath the shade of a large tree, the hare decided to mock D. Slowness once more and challenged her to a run.
The beasts of the woods heard this, and began to laugh. The fox Cecilia, who was very fond of these confusions, said that the turtle might even win the hare. Everything depended on the advantage that D. was given in the race, and if so, I would even bet on it.

All the animals in the woods began to talk at the same time about the race, and they discussed warmly the possibility of the tortoise D. Slowness to win the hare Rosita.

The hare, upon hearing such comments, was beginning to feel annoyed, for it was impossible for anyone to doubt their abilities as a broker.

Since the turtle had accepted the challenge, it was then decided what was the best day for the race and what conditions, and the fox Cecilia was responsible for organizing everything. It was decided that the goal would be by the river, where all the animals would be waiting.
In the day and hour of the race, the hare and the tortoise were already in their places: The Rosita hare, very happy and confident of his victory, and D. Drowsiness with his small and sad eyes, seeming heavier than ever.

As the hare began the race at the starting line, near the tree of the Fortunato Blackbird, the tortoise began further along, almost midway, toward the river.

The fox Cecília gave the signal of departure and the turtle, without wasting time began soon to walk by the slope below. But Rosita was still standing, as she saw D. Slowly slowing down the path, and shouted: “Do not run so old turtle that you still walk and you hurt!”

The hare then decided to take a short nap near Fortunato’s blackbird tree, for the tortoise was going so slowly that the hare, in two strides, would reach it quickly and win the race.

Little by little, D. Slowly there was making its route towards the goal, already very tired but without giving up. Some of the forest animals accompanied the turtle, encouraging it with words of encouragement.

It was already D. Slowly approaching the finish when the hare Rosita woke up in a single jump, saw the tortoise away and ran down hill like crazy. Blackbird Fortunato just shouted, “Watch out, Rosita, so you’re going to fall!” But Rosita would not hear the blackbird and continue toward the convinced goal of her victory.

It was then, very close to the end that D. Slowly tripped on a rock, took a somersault and began to roll down the road!

Without noticing what had happened, the animals in the woods saw D. Slowly crossing the line of the goal to roll! It was incredible … the tortoise had won the race before the amazed look of the hare!

Everyone gave the tortoise alive, carrying her on the shoulders while the convinced Rosita the hare fled to her lair, low-eyed and very ashamed.