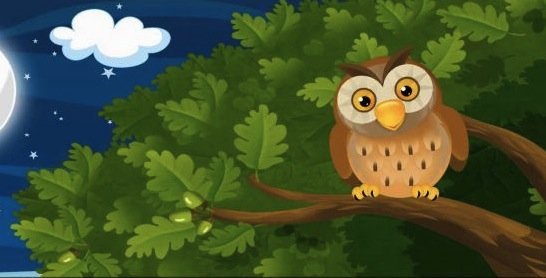 This is a wise old owl story for kids. Once upon a time, a group of owls came to settle in a forest. This forest had many beautiful lush green trees. All the owls in the group were free to choose whichever tree they liked. So, the young owls greedily chose all the green trees. There they built their new homes.

However, there was an old owl also amongst them. He was forced to build his nest in an old, dried up oak tree. Without much of a choice, the old owl settled there. Also, read The Owl And The Grasshopper.


a wise old owl story
Image Source–> www.youtube.com. As time went by, the younger owls became too proud of their beautiful homes. “Hey old man, couldn’t you find a better tree for your nest,” the younger owls teased the older one. “We are so lucky,” they would say, “Our nests have beautiful trees unlike yours!” With old age, comes wisdom and this old owl was wise too. So, he smiled and said, “It is too early to say which one of us is lucky.”

The young owls did not understand what the old owl meant. Sometimes they would still tease the old owl. Who always smiled back and said nothing. Then one day, a group of woodcutters came to the forest. “Oh, look at these trees,” one of them said. “Let’s chop them up and take them back. They will fetch good money,” said another. You may also like to read, The Olive Tree And The Fig Tree.
And so, they took out their saws and brought their trucks. They chopped and chopped until the old and dried up oak tree was the only one left. “This tree is too old, it would be a waste to take it back,” and with that, the woodcutters left the forest. No matter how much the young owls had screeched, the woodcutters had still taken away their homes without mercy.
The old owl smiled and told the young ones, “you see, sometimes a curse is a blessing in disguise.” Only after losing their homes did the young owls realize their mistake.