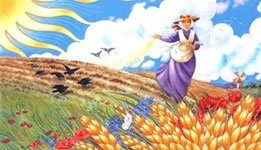 Once upon a time there were two brothers who had spent their entire lives in the city and had never seen the countryside. They decided one day to go inland. As they walked, they watched a farmer plowing the land and were intrigued by what this man was doing.

And they thought to themselves, “What kind of behavior is this? The subject is all day walking back and forth, digging deep furrows in the earth. Why would anyone destroy such a beautiful meadow?”

In the evening, they went back to the same place and saw the farmer placing the seeds in the waterways.

This time they thought, “What are you doing? You must be crazy. You’re throwing good wheat out into those ditches!”

– The field is no place for me. People act like they’re crazy. I’m going home, ”said one of the brothers. And returned to the city.

But the other stayed and a few weeks later saw a wonderful change. Wheat feet began to sprout, covering the fields with a greenness he had never imagined. He tried to write to his brother so that he would come to see this miraculous growth.

And the brother returned from the city, marveling also at the changes. After a few days the green of the shoots gave way to the golden of the wheat. Only then did they understand the reason for the farmer’s work.

The wheat ripened completely and the farmer brought the sickle and began to reap it. The brother who had returned to the city did not believe it.

– What is the asshole doing now? He worked all summer to cultivate this beautiful wheat field and is now destroying it with his own hands! It’s really just a crazy sweep! That’s enough for me. I’m going back to the city.

But the other had more patience. He stayed in the field and watched the harvest work as the farmer brought the wheat into the barn. She watched the careful way he parted the chaff, and the care in storing the rest. And he was astounded to find that sowing a sack of wheat allowed the harvest of a whole wheat field. Only then did he realize that there was a reason behind every action of the farmer.

– This is how things are with the divine works. We mortals see only the beginning of God’s plan. We are not able to understand the whole purpose and ultimate goal of His creation. Therefore we need to have faith in His wisdom. William J. Bennett The Book of Virtues New Frontier Publishers, 1995 Adapted Text