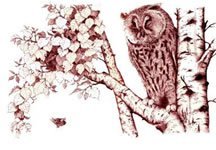 Once upon a time there was a birch rising in the middle of a meadow.

Even at the edge of the meadow shimmered a pool where a duck swam in a circle, dipping its beak from time to time.

The duck climbed to the ground, shook itself, and looked at the top of the tree.

After looking for some time, he shouted:

“Uhm,” muttered a voice up in the birch.

“Come down here,” the duck shouted.

“Uhm,” muttered the owl yawning. And fluttered to the floor.

– Oh! Said the duck. “I never thought an owl had such beautiful wings.”

– Why are you always saying Uhm? Can’t you say anything more?

– Oh my God! Exclaimed the duck. – How can you sleep in broad daylight? Nobody can!

“I don’t understand what you mean,” said the owl. – I always sleep during the day.

– Sleep at night, you say? No way! The night is too exciting to be spent sleeping. It’s when it’s dark, it’s when your eyes get wide, and you expect something to eat.

– You’re not good of the head! Said the duck. – The food does not pass. You have to swim, dive and search until you find it.

– What a crazy way to eat! Muttered the owl.

The duck got angry.

– You’re not out of your mind! Replied the owl. “Normal is hovering dark in the woods without making a sound.” And then, when some little animal moves on the dried leaves, we fall on it quickly and eat it.

– How horrible! Shouted the duck. “Just thinking about it makes me sick.”

– And you, what do you eat? Shouted the owl, who was also angry. – Canary eating for ducks. Disgusting! I even get sick! And how can you eat during the day!

The duck even whistled with rage.

– You know it’s daytime eating! Everyone does it!

– Why, nobody does that! Shouted the owl. “When it gets dark, you’re really hungry.”

And there they were in the middle of the meadow arguing.

The owl opened and closed its beak a couple of times as if thinking, and then shook itself.

– O duck – asked the owl – after all why are we arguing? Do you still remember why we started?

“Sure,” answers the duck. – Because you do everything bad. That’s why…

– And I do as all ducks do. You’re right. No need to argue over that.

“Ah,” the owl thought to himself, “I like the duck, by the way. There’s a weird way of looking at things, but can’t we be friends anyway?”

– What a weird feet you have! Remarked the owl.

“They’re not weird,” the duck replies. “They’re practical.” They are for swimming.

“They might be good for swimming,” said the owl. – When you like to swim. And on closer inspection, I even find them beautiful.

“Come with me,” the owl said at once, “my legs hurt from being down here.” Let’s get comfortable on the birch.

The duck had never ever landed on a tree, but if it gave the owl joy, she wanted to try it.

“As you wish,” he answered.

And the two flew upward; They settled in a branch where they could see everything around.

“Here you have better views,” said the pleased owl.

He looked at the meadow and the pool where the sun was shining. He really didn’t like to land so high on a tree. He was all the time afraid of falling.

– You must have gone crazy for sure! Shouted the owl.

– Do not be exalted! Said the duck. – If you want, we will sit in the grass again. You owls are too stupid to swim.

“And you ducks are so stupid you don’t even know how to land on a tree!”

“Oh my God,” said the duck. – There we are arguing again.

“It’s because you always start,” said the owl.

“That’s not true,” shouted the duck furiously. – It wasn’t me, you started it!

– Hey, why are you shouting like that? Said the duck.

– Oh my God! Said the owl. – Enough! Why do we only know how to argue with each other?

– Because you do everything wrong.

“But that doesn’t matter.” Said the owl. “No need to argue for such a thing.”

The duck thought better and said:

“I think so too, no need to argue about that.” But, look, who always starts?

“You mustn’t be fine with your head,” said the duck. – You always start!

“Uhm,” said the owl, “sometimes I start and you imitate me next.”

– I? Shouted the duck and flapped his wings hard.

Friends, you have to end the discussion.

Then the duck started laughing and said:

– Enough! Besides, I’m getting hungry. And hunger makes me impatient. I will but is looking for something to eat.

– And I’m tired. And whenever I get tired, I get angry. Now I go but it’s sleep.

The duck flew down. He landed in the lake, turned, looked up, and shouted:

His eyes were almost closing.

“Oh, it’s true,” he said next, “you don’t sleep.” You only sleep when it gets dark. Good morning to you, duck. See you next time! Hanna Johansen Die Between and Die Eule Zurich, Nagel & Kimche, 1988 Adapted