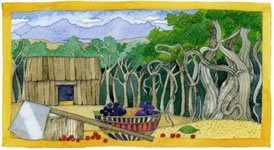 Once upon a time, there was a war. Two countries met face to face and fought for fourteen years, until their kings ran out of money. They declared peace and sent their armies home. But, having no way to pay the soldiers, they gave each man a uniform, a musket, a sword, a bread, a square of cheese, and said:

– Thank you very much.

Some soldiers managed to get home within a day or two, others in three or four. But there was a soldier who lived on the other side of the kingdom and would take weeks to return. After a few days the bread and cheese were gone and he was very hungry. He came to a small village and said to himself, “I’ve fought for these people for a dozen years. I’m sure they’ll give me something to eat.”

It knocked on the first door. An elderly man, with a wrinkled face and angled back, opened the door with a scowl.

“I am a soldier returning from war and on his way home.” Could you give me a piece of fruit or some bread and cheese? I’m hungry.

And slammed the door in the soldier’s face.

I was unlucky, the soldier thought.

He went to the nearest cabin and knocked on the door. He was met by a frowning girl as heavy as the old man’s.

“Doesn’t anyone here know the expression ‘good afternoon’?” Wondered the soldier. And again he said:

“I’m a soldier, I’m from war, I’m on my way home, and I’m hungry.” Would it be possible to dispense me some food? I can work in return. Can I chop wood, bring water or…

“Go away,” interrupted the woman. – I can’t give you anything.

The soldier went to the next house and knocked on the door. A little boy answered him, his expression as frowning as that of the old man and the girl.

– What do you want? He asked sharply.

Apparently he had learned the lesson well. “I’m a soldier, I’m from the war, I’m on my way home, and I was wondering if you could help me.”

And the boy slammed the door shut.

The soldier went to all the houses of the village and always received the same answers:

When he looked into the back yards, however, he saw large vegetable gardens full of farm produce, fruit-laden trees, chickens, goats, and cows. They had more than enough to give, but they didn’t want to share anything with him.

He was still carrying his sword and musket. He could have taken whatever he wanted, but he wasn’t a person for it. He decided to go to the nearest town and see if people would be friendlier there. Before leaving, he stopped to rest in a garden in the city center. He took off his high hat and leaned his musket on a bench. Then he unbuckled his sword belt, opened his coat, and stretched his long legs.

As he sat down, he smelled a sweet smell around him. He looked down and saw that the seat he was sitting on was brand new, probably made that very day. The sawdust and the new wood combined in a wonderful smell. It was then that he saw a lot of carpenter’s nails. This is a find, he thought. “I’ve been away all these years and I’m sure I’ll have to make some arrangements in my house. It’s just a pity it’s not food.” Putting the nails in the bag had an idea. Maybe, in a way, the nails were food.

He jumped off the bench and started to cry:

People peered through the windows and opened the doors.

When people heard the word “free” they all came out: all men, all women and all children.

The soldier smiled at them and said:

“I’m a soldier who comes from war and goes home.” Not so long ago, I went around the world in one day. I had breakfast with the Emperor of China, had tea with the Emperor of Japan, and had dinner with the Queen of America. These very important and powerful people have a secret in common. Every day they eat a bowl of special soup that makes them happy and wise. I have the recipe. The Queen of America gave it to me and I will do it for you.

– What kind of soup is this? They asked.

People shook their heads, as if confused. They had never heard of nail soup. Even the best cooks were perplexed.

“Never heard of nail soup?” Asked the soldier. – It’s very rich in iron. Well, if you don’t want me to make them nail soup, I go to the next village and do it there.

People urged him to stay and make them the nail soup.

– Very well. I will need some things. First, from a pan big enough to feed the whole village.

“My sister has a cauldron in her backyard.”

The village men dragged him to the park. Some children took buckets and ran for water from the source to fill the cauldron. Others brought wood and lit the fire. Soon the water began to boil.

– Do you lay your nails now? They asked.

– Not yet. Too bad this village is so poor and they have nothing to share. There are some ingredients that make the nail soup even more delicious.

– Such as? Asked the villagers.

– Well, if they had some potatoes and carrots, that would be great.

The old man at whose door the soldier had knocked went to fetch a large bag of potatoes. The girl who had sent him away had a huge armful of carrots. The soldier cut them with his sword and threw them into the pan.

“Now you put the nails in there?”

– Not yet. Do you know what makes the nail soup delicious?

They shook their heads.

People rushed for dozens and dozens of onions and tomatoes. The soldier cut them and threw them into the pan. The smell was inviting.

“Now put the nails in there?”

– Not yet. Do you know what makes soup really good?

Everyone shook their heads again.

Everyone had pumpkins. They brought many, as well as garlic, salt, pepper and oregano. The soldier cut the pumpkins and poured the spices. The odor was captivating.

“Now you put the nails in there?”

– Not yet. Do you know what makes the perfect soup? Some meat. Some remains will do.

They all ran home and brought beef and chicken, pork and duck. The soldier cut it and laid it in the pan.

“Now you all go home and bring a bowl and a spoon for you, and by the way, could anyone bring me one too?” Do not forget to bring something to share with others: bread, fruit, cheese, wine.

All those people who had been so bitter and hostile laughed and ran to their homes. They brought bowls and food to share with the neighbors. They lined up and the soldier gave each of them a bowl of soup. Some ate two, others three. The soldier ate four. They sat in the garden, ate the soup and divided the food. Some people began to sing, others to tell stories. A man went home and brought the violin. Soon people were dancing.

– Wait there! The soldier didn’t put his nails in the soup!

Everyone stopped to stare at the soldier. Slowly he took the nails out of his coat pocket and put them gently into the boy’s hand.

– You’re right, I didn’t lie down. But you keep the nails, my son, and the next time someone knocks on your door hungry, you know what to do.

People were embarrassed and looked away.

But the music soon resumed, as did the stories, the songs, and the dancing, without interruptions again.