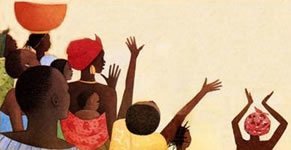 The wheels spun but dug deeper and deeper into the sand, and the car would not move. The engine accelerated and eventually stopped.

Mumo’s very dark skin gleamed with sweat. We got out of the car. Her feet dug to her ankles in the scorching sand. All attempts to push the car were useless.

– How far are we from the Mission Center? Asked Willi.

“It was lucky the car didn’t crash two hours ago,” Willi thought out loud. – I’ll get help. Which direction is the center?

Mumo extended his arm in any direction.

I only saw sand until I lost sight of it, and some thorns.

“You better go,” I said. She was very afraid that Willi would get lost in that vastness of sand.

– Do you want to keep the car by yourself? Asked Mumo doubtfully.

– Keep whose? I asked him to laugh. Who would rob a car in the middle of the Koroli desert?

“There are many people, many different tribes, all very poor here in North Horr,” said Mumo gravely.

Before I had time to scare myself into the loneliness of that wilderness, the two distant points increased in size again. Would the men be back yet? But after all not two, no! Three, four, five points were growing towards me. Was the help we were after so close?

I got up. My eyes stung from the sand and the wind and the glowing sun. Was it some haunt?

The dots turned into shapes, and the shapes into running children. Children running towards me and in ever greater numbers!

Soon I was surrounded by a flock of naked, half-naked children, wrapped in rags, large and small children. Some carried babies on their backs, others dragged smaller children by the hand. All with sunken eyes and hungry bodies. None approached more than five meters.

They stared at me, amazed and open-mouthed, without a single smile at the curious apparition I must be to them.

Adult women, with their cloths fluttering in the wind, approached, slower than the children. They, too, were thin, some old, some new, pregnant women, women with breastfed babies of all skin tones, from brown coffee to dark black. They were silent behind the children and were staring at me too.

What a rich date! I thought.

I leaned against the jeep. The hot plate of the car burned my skin through my shirt. And so we stared at each other, silent and motionless: white woman looks at black and black looks at white woman.

– Hi! I said when I couldn’t take it anymore.

No one answered. No one moved a millimeter, or showed a friendly face.

The thought that the two men could take hours to return with help filled me with fear. Did he have to spend hours staring at the natives and being stared at by them? I couldn’t stand it.

I made a new attempt. Carefully I crouched, as Africans do. My eyes were now level with those of the children closest to me. I started to sing, “All ducklings know how to swim …” trying to look them in the eye.

Suddenly the women recoiled. The absurd idea occurred to me that they thought they wanted to bewitch children. But one of the boys came over and extended his thin arm toward me. I held it carefully and began to count my fingers: “This is the pinky …” The child withdrew her arm, startled.

From the back row, someone pushed and drilled to pass. A girl of about twelve eventually got ahead and shyly asked me in English if she was singing children’s songs. I nodded, relieved, and asked if we could talk a little in English. She nodded equally. Then he turned to the women and said something to them in Suahili1 which, to my ears, sounded as if he were calming them.

This encouraged me to ask you more questions. If you were going to mission school? He nodded, proudly. Then he asked me where he came from and seemed to translate my answer to the women.

The ice was broken. The women muttered something, and suddenly I was surrounded by them.

– Is there a lot of water in your country? – asked the girl. – And green trees?

I nodded and started talking. I talked about our mountains and lakes, our children, and how they were all forced to go to school. The girl translated word for word, and the children and mothers were amazed and incredulous.

With my fingers I drew mountains, cows, trees, and the shape of our houses on the sand, but the strong wind quickly erased my drawings.

I got up and put my arm out the car window. I knew I had a notebook and a marker in my wallet. I took both off but had to hold them in the air above my head. The Africans, large and small, however, had come so close against me that I could barely move.

Having asked for some space, I opened the notebook on top of the car’s scalding bonnet. Once again, I drew mountains, lakes, trees, cows, and houses.

The children climbed onto the car, pushed me, hung on me. Everyone wanted to see and touch the soft white paper.

Lying facedown on the roof of the car, my interpreter saw everything from above, asked me questions and asked me to draw the answers and lift the notebook so that everyone could see those wonderful and unbelievable things.

– Are you a teacher? Are you coming here? Will you stay here with us? Did you bring such a notebook for each of us?

The questions were raining from all sides. Embarrassed, I had to answer no to all.

A noise in the distance made me look up. From the direction in which Mumo and Willi had disappeared a jeep approached. Our help was coming.

I gave the notebook to the girl, who looked at me beaming with her big eyes, but even before I could say thank you, about thirty or forty pairs of hands reached out and tried to catch it. Preciousness was eventually won by a little boy.

I protested vehemently but he didn’t care about my words. He climbed onto a mound of sand, drew the children with his arm, and with his nimble fingers took the staples from his notebook.

I wasn’t expecting this. Silenced, I understood. He was ensuring that everyone had a share of the treasure. He smiled proudly with the marker tucked into his curly hair.

As the notebook was thick, by the time the jeep arrived, almost every child had a sheet in its hand.

– You are fine? Willi asked, worried, seeing me in the crowd. I just nodded my head.

While the men were tying the cable to our car, I quickly tied my handkerchief around my little interpreter’s head.

– Are you coming back? He asked me as I got into the car.

During the trip to North Horr – it was only two kilometers away – I told Willi about my adventure.

“I don’t even want to think about my wastebasket at home,” I finished.

“You’ll see that we will find a way to send them notebooks and pencils.” Said Willi to comfort me.

And so we did.