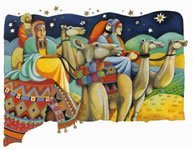 Into the desert travel wizards … riding their camels through the darkness of night.

– See, we’re being guided by that star! Exclaimed the first.

“Guided to meet a king,” agreed the second.

“The King of Heaven and Earth,” added the third.

There was another man traveling with them.

“I wish I were as wise as my companions,” he said to himself. “I would have known better about the reason for our trip before we left.”

“My gift is hidden in the saddlebag,” murmured the first.

“Mine comes tied to the belt,” replied the second.

“And I bring my stitch between the folds of the tunic,” added the third.

The fourth man looked at them sadly.

“I haven’t found a gift worthy of that king yet,” he lamented. – I keep looking.

“My gift is gold, because the king is powerful,” said the first.

“Mine is incense, because the king’s prayers will come to God in heaven,” the second announced.

“And mine is myrrh, for the king will be very famous in life but will be even more so after death,” said the third.

The fourth man looked down.

“I don’t even know what gift to give you,” he sighed.

The four men continued their journey through the night, continuing a journey that would last for many days and many nights.

Finally, the star that led them stood motionless in the night sky, hovering over a humble room.

“What a strange place for a king,” marveled the first man.

“The star clearly shows that we are in the right place,” replied the second.

“Let’s go in and offer our gifts,” said the third.

The fourth man waited outside.

“I can go get camels for water,” he said to himself, “since I haven’t found a gift worthy of the king inside.

He moved to the well and filled a pitcher with water. Since it was very heavy, he set it down for a moment.

It was then that he discovered something wonderful, and leaned over the pitcher to see it better.

He stared at her in wonder for a moment, then let out a loud laugh.

“This is what I will take to the king,” he said, “the light of heaven reflected in the water of my pitcher.”