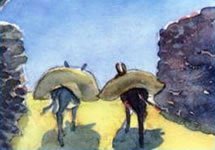 Two thousand years ago, two little donkeys, one brown and one gray, lived in Bethlehem. They belonged to a miller, and his servant never gave them rest, making them work all day. They were forced to carry sacks full of grain and flour from one place to another from morning to night.

If they stopped to see a flower or to look at the clouds in the sky, he would beat them with a stick to make them walk.

The two donkeys would love to lead a life like the cat, the dog or the chickens, who had nothing else to do but hunt mice, keep the mill and lay eggs.

“Oh, oh,” they complained. – The Great Creator doesn’t like us there much! He destined us to carry heavy burdens forever and to serve men.

But one day early in the morning, pastors passed by and told what they had seen during the night. In a stable near Bethlehem, a child had been born in a manger, poor and naked. The angels came to sing to him, and three kings had been led to him by a star who had shown them the way.

“It is Christ our savior,” said the shepherds. “A new king who frees the helpless from their burdens.”

A king who frees the helpless from their burdens is also our king, they thought.

And without the servant of that account, they set out to find him. It was not difficult. The shepherds and their herds had left the way marked. But by the time they reached the stable, it was empty.

Through the cracks a cold wind blew, and from the miracle of that night there had been nothing but the trodden ground, a cloth in the straw of the manger, and a last scent of incense and myrrh still lingering in the air.

They could not know that it was a donkey that had led Joseph gently, but in quick steps, to flee from Herod’s soldiers and save Mary and the Child.

At that moment the miller entered with a stick in his hand.

“Ah, until I finally find the two rogues!” Go, march, to work! He shouted.

So the two donkeys had to return and continued to carry heavy bags from side to side.

“What the shepherds said is a lie,” said the brown donkey, sighing at the burden on his back.

“I believe them,” said the gray donkey, suddenly feeling its burden lighten.

– And the bags on your back? Where is now the king who delivers the helpless from his burden? Asked the brown donkey.

“He doesn’t take the burden,” said the gray, “but gives us more strength to carry him.” Go, give me your bag here.

The miller and the servant were amazed at the donkeys.

“But what’s up with them?” Exclaimed the miller.

Each time he took the stick to hit them it became so heavy that it had to be dropped to the ground. And when the two burritos stopped to see a flower or to look at a cloud, he had no more than to leave them, or scold them with soft words.

The brown burrito was amazed. Now he also believed in the stable miracle, although he had not seen it with his own eyes. Max Bolliger S Risefäscht Aarau, At Verlag, 1990 (Translation and Adaptation)