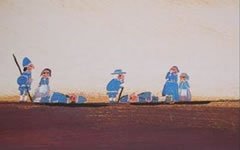 How beautiful was the country where they had settled, and in which they had built two castles of equal beauty! The two kings understood each other perfectly and their subjects as well. The children of some played with the children of others.

One day, however, something serious happened.

As the two kings strolled by, a few passing birds dropped a caganita on the tip of their noses. The kings laughed but then looked at each other. They both said no king should make fun of another’s dirty nose! Such behavior was well worth a war!

Then one of the kings met with his subjects and gave a great speech. Using some complicated words and simple words, he said that the color of the others was not pretty, that their castle was too close, and that they declared war on them. In turn, the other king counted his soldiers and organized an army parade to the sound of military music. Everyone found what they did magnificent, everyone felt proud.

And it was in this spirit that the armies went to war, which began when kings commanded:

– To attack! Charge the enemy!

Despite the large stairs and cannonballs, the wall withstood the attack and did not collapse. That same night they stopped the battle and each returned home. The day had been very sad.

But the next day the battle resumed. However, despite the attacks of the battering ram and all the assaults, the soldiers could not enter the castle. At sunset everyone raised the siege. The journey had been bitter and people had tears in their eyes.

The kings, however, did not want to end the war.

They had a well-laid plan, and each thought that victory would soon belong to him! The soldiers set to work and, with the help of shovels, picks, and wheelbarrows, dug all day. But the plan of some was no smarter than the plan of others. Disappointed, they looked at each other in amazement.

Then the furious kings decided to meet to end the war.

Everyone had long forgotten about the children.

Now they looked at each other, surrounded by their children. The kings looked into each other’s eyes. Silence surrounded everyone.

Suddenly the children ran to each other and started playing. The flags were lowered and the spears laid down. But the haughty kings did not want to hear about peace!

It was then that they set up a chessboard for the kings to play. Soon everyone had lost interest in the conflict. And the children continued to play…

Today, how far the battle time seems to us!

And how beautiful is our hillside village, populated with houses and gardens!
Éric Battut Bataille Paris, Autrement Jeunesse, 2000 (Translation and Adaptation)