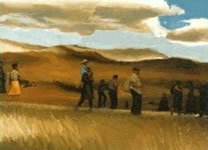 My mother woke us up very early. After I told him what I had done to the fish, we went to see if they were still alive. Marina clapped her hands and called them by name, but the moonlight and light remained hidden.

Our luggage was ready. Two for our mother and me, and one for Marina. The day was beginning to dispel the shadows of the night that still filled the path that morning. I looked back for the last time as we walked away. There was our oak tree, the little yard, and my mother’s garden where the flowers, still hidden in the earth, awaited spring. Would we ever go back? Would our father know where to find us?

We walked for a long time… We were going very slowly and there were people passing us. Others walked beside us, and what they told us made us believe we had done well to leave before suffering such horror. We walked, we walked … At one point, a man with a wheelbarrow let Marina travel on it for a day. He even took us the luggage. That was the best day we had.

At night we slept in the fields or on the farms. One rainy afternoon, we were lucky enough to find an abandoned house. That night we slept well. The other day, some Liberation Army men stopped and shared their chicken with us. That day we were able to eat fricassee!

– Do you know our father? Asked Marina.

The men said no.

We kept looking for our dad, thinking we’d see him sometimes. But it was always someone who looked like him. Sometimes Marina and I would ask our mother to make a stop because we felt unable to walk further. Fortunately, our mother’s courage helped us move on. One morning we heard someone shout:

– You can already see the border! We’re close!

The whole column vibrated with the cheers of the people, who shouted with joy until they were hoarse.

After crossing the border, the trip went much better. There were tents to stay, food to eat, and where to warm it. You could do laundry and bathe. There were many children in the refugee camp. I became friends with two boys, Behar and Admir, and we played together. They let us paint the Liberation Army initials on a wall, which made us feel as if we were fighting alongside them to free our country from the occupying army.

We had been in this camp for a long time when our father found us. One day I looked up and saw him. Dirty, thin … but beautiful! Marina and I shouted for joy. He took us and covered us with kisses. I saw that tears were streaming down my mother’s face. My father hugged her and stroked her hair as he murmured words in her ear. She stroked his face with her fingertips, as if to make sure she wasn’t dreaming.

“Is it really true that you are here?”

– I am! Answered my father sweetly. – Only by miracle did I find you. I searched for you everywhere!

Marina clung to his legs.

– Papa, are you staying with us?

My father smiled. I didn’t know how, but it was enough for me to know that he would stay.

We had to wait long months before we were told that we could return safely. That night we all danced around the tents. It was a happy and beautiful party.

The next day, in the morning, began the long walk that would take us back home. But it was a sad walk, since along the way we didn’t see houses, farms or animals. Just ruins and big holes where the bombs had fallen.

We walked for a long time…

I knew our house would no longer exist, but I refused to accept it. Marina, always behind our father’s back, kept chattering happily. She was the only one who thought we would go back to the same life as before.

When I saw the oak tree still standing, my heart rejoiced. Hopeful, I shook my mother’s hand. It could be that all was well. But I soon saw that our house no longer existed. Only pieces of walls remained standing. In my mother’s garden, some flowers were beginning to dawn. The rest was a lunar desert.

Marina was the first to think about fish. He took a piece of crusty bread from our mother’s bag and ran to the pool. We all went after her to comfort her… But our pool glowed and thousands of fish swam in it! My mother put her hand on her chest.

“They found to eat,” said my father.

– They are very intelligent!

“They survived, despite everything and against everything,” my mother murmured.

The fish, one after another, came to her on the edge of the pool.

– See! The Moonlight is this… and the Light is there! He said, sure of himself.

Which made us laugh because the fish were all exactly the same.

I leaned over the water.

“We’re back,” I announced to Luz and Moonlight. – We returned home!

There is a village in Bosnia and Herzegovina called Jezero. In this village in 1990, before the outbreak of the Bosnian war, a man named Smajo Malkoc offered his sons an aquarium with two goldfish.

When war broke out, Smajo Malkoc’s family was forced to flee Serbian-Bosnian forces. Hoping to save the two fish, the woman threw them into their lakeside lake.

When they returned in 1995 at the end of the war, both Jezero’s house and village were nothing but ruins. The lake, by contrast, had come to life. It had filled with innumerable fish whose reflections shone in the water. Delivered to their fate, the little animals had managed to find food in the depths of the lake, and had multiplied.

The fame of these exceptional fish spread and people from the surrounding villages rushed to see and buy them. It would soon prove that these fish were not only beautiful, but that they had added value. They brought prosperity and celebrity to the Malkoc family as well as all the inhabitants of Jezero, and the village could be rebuilt.

It is therefore this magical and true story that is at the origin of this book. But my version is not just for these people or the people of this country. It is addressed to all those who in the world, forced one day to leave everything, have found a ray of hope in the most difficult situations. Eve Bunting On Retrograde Paris, Syros Jeunesse, 2001 (Translation and Adaptation)