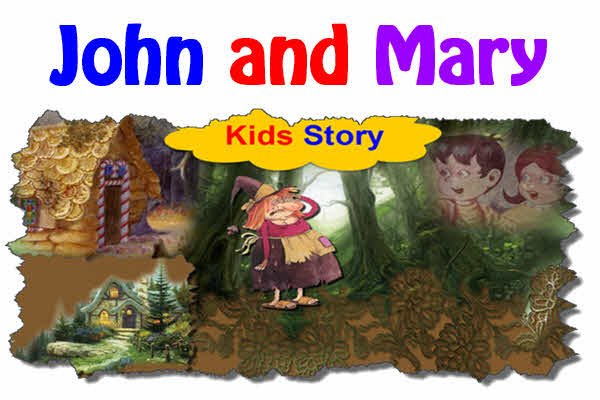 In the middle of a forest, many years ago, there were two kind brothers. The Johnny and Mary.
They lived in a cabin and although poor people, they were very fond of all the birds.
The two brothers, hear her mother call them:

– You have to take lunch Dad!
Thus, the two boys, left the road, always closely followed by the bird friend. However, as a precaution, they loosened stones one by one on the floor.
Meanwhile, further away, the woodcutter tired, dropped a pine forest to your ax blows.
However, the two brothers, but what gave them the whim! Withdrew from the pebbles, after a butterfly.
But it made the two brothers, turn away from terrified caminho.Maria, sat down and began to cry.

But Johnny, wanted to continue the path. When suddenly they saw a little house.
Thus, the two brothers, continued down the road. Always followed closely by bird friend.
When they got close, you see little friends, the house was made of candy! But while the two brothers, ate with caution, came a horrible witch with a broom in his hand.
And the witch invited them in and eat whatever they wanted without destroying the roof and the whole house!
However the bird, full of fear and horror, flew celere the forest, to warn the woodcutter.
And when it arrived tired and worried.
Thus, anxious parents, followed by the way, always guided by, the bird friend.
Every route, the cabin, the ugly witch and Gabola, pulled by Johnny to put him in the cage
But Mary was smart! Just look at the idea of ​​it!

Take the broom of old and runs with it.

The witch so damaged, that not rolled a ball.
And Johnny, taking advantage, pushed her to the cage.
But the witch was terrible! And so carefully, went out and reached the broom on the cable. And the funny thing was, as you see, at this time, pulled the old inside and the boys out.

And while the old screamed, the duo of brothers sang.
And the old and the two ended up dropping that tumble. However, without loss of time, rushed to the stove. And so in a few moments, the flames already tremelicavam and did burn the broom, the brothers sang.
After only remaining ashes, the broom was burned.
But at that very moment, here who comes down the road, brought the bird friend!

What a joy, were your parents!
Finally, they let the old little cage, poor thing!

And the witch came out, totally transformed!
In gratitude, she who was a good woman, victim of an evil wizard, gave the land to the old woodcutter, who became from that day on, a happy farmer.