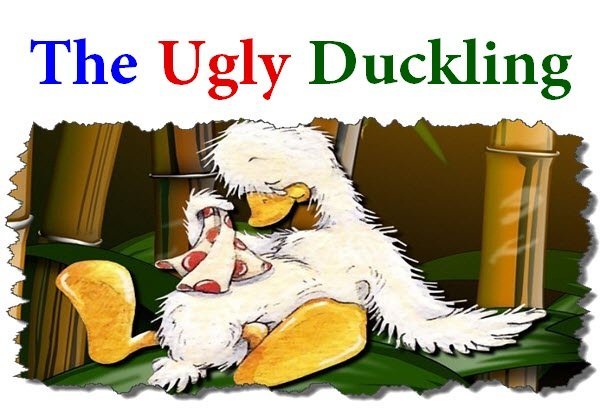 Once. . . many years ago, a spacious yard, where they lived several birds, owner very friendly paw was shocking her brood.

One by one, the ducklings were leaving. . .

There was still one, that there was not even chopped egg.

There was owner paw again for brooding.

And owner paw, returned to his nest.

To do, waiting for another child, that cost to be born.

But that ugly duckling !!!!

But that was not part of her brood. Lord duck, became very angry.

A week later, there was Mom paw in their natural balance to the lake shore, followed by their young in a row.

She jumped in and so did they.

They swam all day in Tour of the lake,

raising small waves as they went.

One sunny morning, mother duck came out with the pups for a walk when he heard others screaming ducks:

– But how ugly duckling that!

And the duckling or ball took. Followed his mother and brothers.

But poor duckling, nor his mother nor his brothers wanted to know him.

Approached the lake and to see themselves reflected in the water, got a shock!

Disconsolate and sad, went in search of someone who could be your friend.

Walking, is a family of birds and tried to make friends, but their joy was short-lived.

Dona passarinha, did not like the new guest and shooed the nest.

Alone, still walking, when suddenly, in the lake, he sees a huge bird.

Ran and swam to him.

At first, it seemed to be a good friend.

Played enough, when suddenly was hit by wood duck, dangling in the water.

It took fright size that landed behind the foliage.

The time passed and the routine was to always.

With the arrival of autumn, the leaves started to become yellowish and were falling, spreading the floor. It was when looking at the sky, he saw a flock of white swans.

– How beautiful and how they fly!

Look at, but what a surprise!

Not believing, was looking at his reflection in the lake.

And in that instant, happy and raising beautiful, beautiful neck, swam and singing along to his mom.