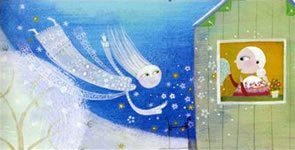 Many years ago, an old woman lived in a far away place. It was plump and sweet like a Christmas pudding and kept sweeping, dusting and polishing from sunrise until the first stars appeared.

There was not a speck of dust or a cobweb in your house. She was always busy because there was an empty place in her heart and she was sad when she thought about it.

Now, one fine night, Babushka was polishing the candlesticks when he saw a bright new star twinkle through the window.

“Look, the glasses have a stain,” said Babushka. “I just got it now. But what a bore.”

The star was hidden behind a cloud.

Babushka began to rub the glass. He looked outside and saw an angel in the garden.

“If you want to come in, you have to clean your feet,” said Babushka.

The angel flew away.

There was a knock at the door. They were three kings with their golden crowns.

“Come in, your majesties,” said Babushka, “but please take off your royal boots.”

“We are following the star,” said the three, “who will lead us to the little new king. Would you like to come with us?”

“I don’t have time to travel!” She said. “Who washes me the dishes later?”

The camels of the kings were by the gate.

The camels startled and galloped away, and the kings chased after them.

“I will sit for a while to rest my feet,” said Babushka, “and then I will clean the canary.”

As soon as he had just sat down, he began to nod with sleep and fell asleep.

The angel appeared again and sang a song about a boy born in a stable who had only one diaper around him.

The star, rising from behind the cloud, burst through the window with its light and illuminated the sleeping face of Babushka, who woke up.

“God help me,” he said. “A baby in a dirty, animal-filled stable where there’s not even a warm shawl covering it? I have to get on my way now.”

In a basket he put a little toy clown, a warm shawl, and a bottle of ginger liquor for the grown-ups, and set off on his way. The starlit sky was full of angels, but Babushka was not looking up.

“All this dust on the road! This is a shame,” she said.

Babushka saw ahead a woman and a girl on the side of the road. The girl was crying.

“What’s up, my dear?” Asked Babushka.

“We were running to see the new king, and she lost the doll,” said the girl’s mother.

“I put it in my pocket and she must have fallen,” the girl sobbed.

Babushka took the toy clown out of the basket and made him dance. The girl stopped crying and laughed.

“Here, with all my love,” Babushka said, handing him the doll.

“What’s up, my dear?” Asked Babushka.

“I loved seeing the boy so much,” said the old lady, “but I can’t go quickly because my legs hurt so badly.”

“Look,” said Babushka, “take this fortifying liqueur with all my love. It will do you great.”

The old lady took a long drink and walked away with a smile on her face and a word of gratitude on her lips.

“I couldn’t keep up with the others,” he said. “My arms are so cold I can’t take this little lamb any longer. It’s a gift for the new born king.”

Babushka wrapped her shawl around her shoulders.

“Take this with all my love,” he said. “So you won’t feel cold during the trip.”

Babushka continued on his way. The basket seemed light as air. He stopped and looked inside. It was empty!

“Oh, my old fool,” she said to herself. “You gave everyone the presents.”

Sadly, he turned back the same way. “I can’t go greet the boy without taking a gift,” he said.

That was when he heard a voice calling, “Babushka!”

Babushka stopped hesitantly. “I don’t bring any gifts,” he said.

Babushka came in and there was the boy wrapped in the warm shawl. The little clown was beside him in the manger. Joseph drank his fortifying liquor.

“But I gave all the gifts!” Said Babushka.

“Whatever you gave with love you gave it to my son,” said Maria.

Babushka observed everything very well around him.

“Look at these cobwebs,” he said. “I’ll clean them up already.”

It was then that the boy extended his arms and smiled. His eyes looked like the starry, deep night. His smile was love itself.

Babushka felt a strange sensation that made her forget about the cleaning.

Babushka took the boy in his arms.

Surrounded by all the animals, Babushka had a party in the old gray donkey’s muzzle, and the donkey put its muzzle to his ear. The boy laughed contentedly, as did Babushka. She pressed him against her.