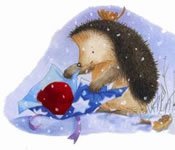 The freezing wind woke the Little Hedgehog from his deep winter sleep.

All around her the leaves fluttered in the air and a huge blanket of snow covered the clearing.

Filled with cold, he tried to fall asleep again, but in vain.

Suddenly something fell from the sky …

… And landed right in front of you. It was a beautiful gift! And it had your name written on the label!

What a surprise! A beautiful red wool cap … even your size!

That’s weird! The pompom was always turned the wrong way. Perhaps the cap was too big for a still-so-small hedgehog.

He took it off and decided to put it away.

Until you had a brilliant idea …

He wrapped the hat again and made a nice bow.

He tore off part of the label and wrote mysterious words on the other.

Then he went to his friend Bunny’s house.

As he was not, he left the gift in front of his door.

Little Hedgehog tried to find his way back to his home.

The snowflakes were falling more and more. Lost, I no longer knew where to go.

– Oh my God! I should not have gone out in this cold weather! He murmured. “But I’m sure my bunny friend will be very happy with the beautiful wool hat I offered him.”

– What a bad weather! Muttered the Bunny back home.

He saw the gift lying on the doorstep and beamed.

– What will it be? He exclaimed. He opened the package and shouted, “A wool cap!” For me!

Either way, his big ears were always BAD!

The hat was much bigger now. It had become too big for such a small rabbit.

So … Bunny wrapped the hat again and wrote something in the corner of the label.

Then he went out and went to his friend Badger’s house. In the cold it was very grumbling.

– Who’s there? Asked the Badger, intrigued.

– Merry Christmas! Repeated the Bunny. And lovingly, he handed the mysterious package to his friend.

– A Christmas gift? Exclaimed the Badger, greatly admired. – For me?

Happy, the Badger put the cap on his head, but his ears were completely plugged.

– What about? Is it OK for me? He asked, looking in the mirror.

– As? What did you say? Asked the Badger.

– Don’t you like him? Asked the Badger, turning back.

However, the Bunny had already left.

– This hat won’t fit me! He said, taking it off. – I can not hear anything. What a pity! It has such a beautiful color!

The badger rewrapped his hat without worrying about the label.

She headed to her friend Fox’s house.

The Fox was leaving for his usual outing.

– Good, you’re here! Said the Badger. – I have a Christmas present for you.

– Yes, Christmas! Confirmed the Badger. – It’s a very special time that reminds us that we must all be friends! – answered, moving away.

Thoughtfully, she watched him again.

He made two holes for his ears and stuck it in.

Happy, he went on his way.

The whitish plains shone in the moonlight.

The Fox sniffed around him when he suddenly discovered a small trail. He followed him on one side, then on the other …

Something was under the snow!

The Fox began digging, digging … until it found a little hedgehog.

He was cold and did not move.

He put the little one inside the wool cap and carefully carried him to the Bunny’s house.

He and his friend Badger were having lunch.

– See what I found in the snow! Exclaimed the Fox.

They both peered into the hat.

– A hedgehog? How could you have found a hedgehog in this cold? Asked the Badger. – He has to be revived immediately!

“It’s my friend the Little One,” shouted the Bunny. “Maybe you got lost trying to get home.”

– Hi! He stammered sleepily. – How nice! This blanket is so warm!

The friends looked at each other.

The Bunny laughed and the fox shook his head.

– Hmmm! Said the Badger. “I think this wool cap really is perfect for our Little Hedgehog!”