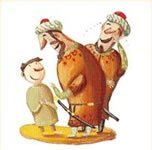 It was Friday, a market day, and little Joseph drove off the village, where the smile salesman set up his van. It was a red-and-yellow van, with drawn golden scrolls that said, “Selling smiles, crazy laughs, and other hidden laughs.”

This little merchant was very chubby and sold smiles like candy, but much more expensive. While the teasing laughs sold for 2 euros each, the half-smiles cost 60 euros, and the laughs 150 euros.

Despite the high prices, the small smile salesman always sold many. Some villagers came with the basket overflowing with leeks, carrots, potatoes and placed a small envelope of smiles over the vegetables.

– Come here! called the salesman, who obviously had a huge merchant smile. – Here, there is only happiness! I bring you half smiles, very fresh; There are also malicious smiles. Today’s super promotion is for clown smiles: they cost 30% less.

The contagious laughs were never on sale, for they would bankrupt the little merchant. Just buy one to make the whole village laugh!

The little salesman made a lot of money in this village: the inhabitants were so sad that they immediately consumed the smile at the counter.

And everyone went home telling funny stories. Everyone… except little Jose, who had no money. Usually, children have no need to buy laughs or smiles because they have them. But it may happen that the smile is stolen from them by a foolish and mean adult. That was what had happened with little Joseph. His smile was gone, and the boy had been left alone in his corner.

Before going to school, little Joseph struggled. He would stand in front of the mirror, put his hands on his hips, frown and say:

And it had a beautiful clown smile. But this clown smile weighed on him like a metal mask. It took a giant force to maintain it. Then, after three or four attempts, the smile faded. Little Jose looked at his reflection in a shop window and saw his face full and closed. The smile was gone.

That Friday, José stood in line, intent on asking the small shopkeeper to lend him a smile. Ahead of him, in line, was a sad and melancholy giant. When the turn came, the sad giant looked for some thick-fingered coins in his tiny purse and cleared his throat:

“Don’t you have … any laughter for ten cents?”

The little shopkeeper reached for a flask and got him a niche smile on balance. Joseph was even sadder because he didn’t even have the money to buy a half smile. Not a penny to ask for a malicious smile or a hidden laugh.

However, when he noticed little Jose, the round trader gave a wide, very wide smile.

The little merchant examined Joseph from head to toe for long minutes… Then he said:

“I need a boy like you, a boy who has lost his smile.” Tell me something … are you interested in working with me?

Joseph opened his eyes wide, but did not say a word: he was too excited! However, the small merchant, who specializes in inner smiles, had understood.

– Then come in! – Invited the merchant. – Get in my van. As soon as I finish serving my customers, I will show you the…

It was dark and little Jose’s eyes widened. There were hundreds and hundreds of shelves on which were placed envelopes of all colors, full of smiles, each with its own name. There were also jars full of gesture laughter and crazy laughter! On the labels, little Jose could read: “grimaces”, “half smile”, “toothless smile”, “happy smile”, “laughter of superiority”, “laughter of mockery”, “smile of gentleness”.

– Where did you find all these smiles? asked the little boy.

– Ah ah ah! laughed the very chubby little merchant. “Sometimes just lifting them off the ground or picking them up!”

The little man got up and showed him a net to catch butterflies.

I usually open an envelope and grab the invisible smile. On summer days, when the air smells like strawberries, I just have to reach out: happy smiles and crazy smiles run everywhere! In winter it is a little more difficult. With the cold, faces have a harder time relaxing and smiling. And when a face makes a face, it drags other faces. In winter there are epidemics of sad faces, such as influenza epidemics. I earn very little in winter.

The man looked at little Joseph:

– I’ll explain what I expect from you. What interests me is to see others smile. Everyone, do you understand? Even those who have no money, even those whose childhood smile has been stolen. That’s why you are here today. If you want, you do some tests. You’ll experience all the smiles and laughs… You’ll study them and see the ones that are most effective in making others smile: the ones we can make friends with. The smile is like a bond between people. When you smile, it’s like when you reach out to someone, you see?

Of course little Jose understood. And I was happy, so happy! Is work more enjoyable than testing smiles? For a month, worked for the small trader. He experienced, one by one, all the smiles, and all the laughs. He walked by subway, by bus, in the lines of cinema and theater; He went to the pool, the canteen, and noted in a small block what effect the smile had on other children.

One day, on bus number 83, he put on a clown smile, one of those smiles that sounds a little fake. People approached him, but within seconds everyone started crying, as if they had guessed that there was sadness behind that too-big smile.

The other day, on bus 38, he opened the envelope and gave him a beautiful “gentle smile” with which he looked at people. The travelers sat for a few minutes, cleared their throat, looked at the clock, and then, as Joseph continued to smile without saying anything, departed just as they had arrived. “A gentle smile is good at first, but it’s not enough to make friends,” wrote little Joseph.

When she swallowed a crazy smile, it was terrible! In the subway, he laughed to himself, and everyone laughed with him. Everyone went crazy. People banged their heads on the glass and no one spoke. And they always laughed, unable to even change a phone number. They just wanted to blow and cover their eyes, now full of tears. “Too violent, especially when people don’t know each other. Try something else to make friends,” wrote the little boy.

With the laughter of superiority, the one that is used to make fun of others, something very strange happened: people were very small and he saw himself as a giant surrounded by pygmies looking at him with a terrified air. Nothing special, thought little Jose, who, tonight, poured this laugh into the toilet and flushed the toilet.

When, two days later, he broke into his “restrained laughter” (a kind of laughter that sounds like a groan), he found that many startled pairs of eyes were fixed on him, as if to say, “Are you kidding me? Are you clucking? ” He was no longer successful with the half smile: “What’s up? What? Are you laughing at me or what?” they seemed to tell people.

The following Friday, Joseph went back to the small shopkeeper and noticed that he was no longer so plump because he had aged so much.

He leaned on his cane with great difficulty and his eyes had lost all brightness. He listened, trembling, to little Joseph talk about his experiences.

“It’s perfect,” he said in a shuddering voice. – You did very well testing smiles and laughter. I have a surprise for you.

The salesman showed him a shining bottle and murmured:

– I just found it: it’s the magnetic smile, the deepest smile! I put it in a bottle. Drink it!

Joseph drank, and he was soon full of light: a warm sensation rose in his belly, tickled his ears, and sparked his eyes. Joseph felt very strong.

“It’s weird, I feel undone inside,” he said.

“Go to your life, my boy,” the little man murmured. “Then come tell me if this smile is effective for making friends.”

The little merchant was right: that laugh was totally magical! When he got out of the van, little Joseph saw that all the villagers wanted to be with him.

When he arrived at school, the children called:

Then little Jose laughed even harder, but with a laugh of pleasure. One of those who hadn’t tried it yet. He wrote: “Magical, magnetic, giant smile!”

And as this smile made him smarter, he wrote: “It has nothing to do with the clown smile that sticks to your face and fades just as it arrives. This smile comes from within and enlightens everyone. . ” And he wrote, “All that matters comes from the depths of us.”

When little Jose returned to the van, he was still smiling.

– It’s the most wonderful smile there is. Everyone should have this quiet smile, because people approach us and smile too. And that makes us want to smile more.

The little shopkeeper sighed contentedly and then closed his eyes. Joseph saw tiny tears of joy shine like pearls in the corner of the man’s eyelids.

“You know,” said the salesman, “this deep smile is the work of my life.” I spent a lot of time looking for it and now I can rest. But I want to give you a gift…

– Keep your smile in this bottle, don’t let it disappear! Put it there every night, keep it with love and friendship. And you will have a formidable life, ”added the small merchant, already very old.

When he shook the very weak hand of the smiley salesman, little Jose was very sad. He knew the van would be leaving that night and that he would never see the little merchant again. But he had put in that jar the most magnificent of gifts, a lithe goldfish called a “bright smile.”

He knew that with this calm, gentle and happy smile, he could make many friends. And that your life would indeed become wonderful. Sophie Carquain Petite Lions de Vie. Pour l’aider à s’affirmer Paris, Ed. Albin Michel, 2008 (Translation and Adaptation)