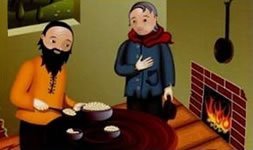 This is the story of a miser, who lived in a large mansion perched on a high hill. One day something happened that changed your life forever.

The man’s house was very old and full of drafts. The miser lived alone, except for a few servants and a dog, which he had not even named. The old man slept and ate in one of the mansion’s many towers, and spent his days counting his gold. Gold was what I liked best in the world, and I never shared it or spent it.

Everyone knew him as the most miserly man ever. He never invited anyone home and never gave anyone a gift. In fact, I only went out once a year because I was afraid of spending money. And when he left, he traveled in an imposing carriage, accompanied by the dog and a servant, to collect taxes from the poor peasants who cultivated his land.

One of those times, as he was returning home at dusk from a successful tax day and clutching his bag full of gold, the carriage was stopped by robbers. The miser well screamed for help, but in vain. The robbers took off his clothes, forced him into rags, and took him with the dog far out into the field, where they left him without food or drink.

The man was very shaken and shouted at the dog, which he never named, because the dog had not attacked the robbers. It was now getting dark and they were both completely lost. Desperate, the man crawled under a hedge, weeping and thinking of the stolen gold until he fell asleep. As for the dog, she curled up close to him.

The next day the man woke up with cold, pain and hunger, and went with the dog in search of a village. They walked and walked until finally they came to a road. He didn’t look like a soulmate, and the miser was hungry and sorry for himself. Suddenly the dog barked and ran.

The man followed him and came across a small, secluded cabin surrounded by wild roses. When he saw white smoke coming out of the chimney, he was encouraged and knocked on the door. Suddenly, however, he hesitated, remembering how he had always sent those knocking on his door for help. Who would want to help a rag like him? She was about to turn around when she heard a pleasant voice ask:

“Sorry to bother you, but I’m lost and hungry.” Could you give me some food for me and my dog? And a warm place to sleep?

“Of course I can,” said the friendly voice. – Come in.

They entered the cabin, which they found quite naked. In the room there were only a few pieces of furniture and the windows had no curtains. But the fireplace was lit, and a kind-looking old man was sitting at the table. Next to him a brown dog wagged its tail and smiled. The man got up and laughed heartily, saying to the dog:

“You’re a poor lost soul, Archie, and I brought you a new friend!”

Then, turning to the miser, he invited:

– Come in and sit down. Welcome to my feast! Today we will have a delicious rice feast! – joked.

He went to a shelf to fetch two small bowls and said:

– We’ll have to share this rice, because that’s all I have. And your dog will share Archie’s food.

The old man poured some rice into Archie’s large bowl for the two dogs and divided what was left between him and the miser, who was so generously amazed. How could that man be so happy despite being so poor? The miser thought of his gold, his servants, and his mansion. Despite all this, he had never felt so happy as this man who had so little. And he felt guilt and shame for his greedy conduct all these years.

Hunger brought him back to the present, and he ate the rice greedily, thinking he had never tasted anything so delicious. He soon became infected with the old man’s kindness and found himself telling him how he had been robbed. The old man listened attentively and then told him:

– Your story saddens me. You have so much, yet your life is so empty and lonely.

He offered the miser his seat in front of the fireplace, said good night, and lay down on the floor to sleep.

The miser was so moved by the goodness of the old man, and so grateful, that as sleep fell and he thought about what had happened, the ice of his heart began to melt. Tears streamed down her cheeks as she realized how horrible her life really was. And for the first time, she had a party for the dog she had never named. He also decided to return the man’s generosity.

The next morning, when he woke up, he invited the old man and the dog to come and live with him in the mansion, an offer which they soon accepted with joy. And without delay they left for home.

From that day on, the miser changed his behavior. He and the old man became friends and lived happily with Archie and Merry, the name he gave to his dog, who grew up with the love of the owner. No one else was ever sent away from the empty-handed mansion, and instead of collecting taxes, the miser used gold to improve the living conditions of the local population. Twice a year, she invited neighbors and children to parties that were so much fun that they became everyone’s topic of conversation.


Ambition and selfishness spoil everything and everyone.

A wise person knows that the path to true happiness lies in sharing what he has, however small. Dharmachari Nagaraja Buddha at Bedtime London, Duncan Baird Publishers, 2010 (Translation and Adaptation)