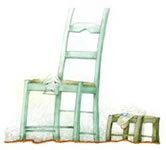 This chair did not have its feet flat on the floor. It was a slightly unbalanced chair, as you will appreciate.

Nothing distinguished it from thousands of other modest, roughly painted chairs to fool the worm. She had four legs, a good-sized seat, and a very straight back that made her look like a corset and haughty lady. Forgotten in a corner of the house, unhappy with her fate of vulgar chair, she sighed all day long:

“As much as I want, I don’t conform. They put me here, in this insignificant house, when I could stand out in a luxury salon. Sad fate.

The banks, very friends of the joke, laughed at these lines. One of them, an old cobbler owl, said to him like this:

“Naturally, I wanted to be a throne, didn’t you?”

“The throne lacks his arms,” ​​noted a kitchen bench.

“And he lacks the wood …” added another. “Where has a pine throne ever been seen?”

The benches were laughing again, facing the chair, that even their backs could not return to them.

“Leave the little one alone,” advised the very nice table. – Got your weaknesses, what do you want? If they shimmied under one foot, they might be out of balance. The harm was that they made it with wood still green.

“The table lady is always ready to forgive her,” said the owl.

“It’s just that I had ambitions when I was young.” I wanted to be a banquet table, imagine! I could only see myself dressed in a large linen and lace tablecloth, adorned with silver candlesticks, covered with fine platters and gleaming silverware.

The banks were silent. Speaking of serious things, the banks didn’t know what to say.

“But I’m not unhappy,” the table continued. – Here the cutlery is frosted and the plates cracked. They almost never cover me with towels, but people’s hands pass over me and make me parties. The elbows rest on my top. My fingers tap me lightly as they wait for the soup bowl and the freshly baked bread. I know that people quench hunger and thirst around me, I know they like me and they don’t dismiss me. It is worth being table.

That one is content with little, the chair thought, straightening further on its four weak legs.

One day a beautiful procession of horsemen passed by. It was the king who went hunting with his nobles. The entourage galloped across the only street in the village. The women, men, and children, who had never seen such beautiful horses or riders so well dressed, came to the windows and said goodbye with handkerchiefs.

In the house of this story, nothing else was talked about for the rest of the day. The seat, this one, only sighed to itself: “Ah, if the king took me …!”

The horsemen passed through the village again in the evening. They brought big game: wild boars, foxes and deer, crossed in horses. And the knights came tired. Of all the softened was the king. Fat, very fat, the king was fed up with running, hunting and bumping. What I wanted was rest.

From the open doors of the houses came an appetizing smell of loaf of bread. His Majesty was tempted by the smell and, gesturing, had the entourage stopped. The Grand Brook helped him down, which was still difficult, and supported him to the doorway, precisely the door of the house where this story takes place.

The old couple who lived there were shocked by the visit. Serving him a loaf of bread, buttered with fresh butter, did not require much etiquette, but where did such a distinguished visitor sit?

It was the only chair in the house, the one we have been talking about. Finally, he was going to prove to the mocking benches that a chair, even of pine, knows how to serve the nobles of the earth and support them with the weight of power. Let them who saw her, fragile car seat, act as a throne, for then!

We could end the story here, which ended well. But there are setbacks …

The peasants reached the chair for His Majesty, who rested. Whether it was the unexpected weight or the emotion, the poor little girl moaned … moaned … and, not holding on to her legs, she broke loose with the king on top.

Catrapumba! The king falls in the middle of the ground, the entourage is alarmed, the peasants are frightened, and the banks and stools almost collapse in the house.

Dented and very sore, the king stood there:

“Poor things, it was not their fault,” said the king, referring to the old men. – Give them money for a new chair. There!

Gone is the royal entourage. The chair, sad pile of crumbling planks, stayed where it had broken. Firewood for the oven, soon … António Torrado Thirty for a Line Porto, Civilização Editora, 2008