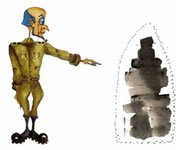 Once upon a time there was an atom.

And once upon a time there was an evil general with a uniform full of awards.

The world is full of atoms.

Everything is made up of atoms: atoms are tiny, and when they come together they form molecules that in turn form all the things we know.

When atoms are together harmoniously, everything works perfectly. Life is based on this harmony.

But when you can break an atom … and its parts will hit other atoms, they will hit yet other atoms, and so on … it gives a terrible explosion! It is atomic death.

Well, our atom was sad, because it was in an atomic bomb. Along with other atoms, he awaited the day when the bomb would be dropped and they would break, destroying all things.

Now you must know that the world is also full of generals who spend their lives collecting bombs. And our general filled the attic with bombs.

Every day the general would go up to the attic and put a brand new bomb there.

“When the attic is full,” he said, “I’m going to make a beautiful war!”

How can it not be bad when you have so many bombs at hand?

The atoms in the bombs were very sad. Because of them, there was going to be a huge catastrophe: so many boys, so many mothers, so many kittens, so many goats, so many birds, all, after all. Whole countries would be destroyed: where once there were white houses with red roofs and green trees all around… there would only be one horrible black hole. And so they resolved to rebel against the general.

And one night, without a sound, they all got out of the bombs and hid in the basement.

The next morning the general went to the attic with other gentlemen.

– We’ve already spent a lot of money making all these bombs. Want to leave them here to get mold? What do you intend to do anyway?

“True,” replied the general. – We really have to start this war. If not, I can never make a career again.

When word spread that the atomic war was going to break out, everyone was crazy with fear:

“Oh, if we hadn’t let the generals build bombs!” – they said.

Only it was too late. Everyone fled the cities. But where could they take refuge?

In the meantime, the general had loaded his bombs on a plane and was dropping them one by one over every city. But when the bombs fell, as they were all empty, they did not explode!

And everyone, happy to have passed the danger (even seemed like a lie!), Used them as flower pots.

They discovered that life was more beautiful without bombs. And they decided never to make wars again.

The mothers were happier. But also the parents. Everyone, by the way. And the general?

Now that there were no wars, he was fired.

And to use the award-winning uniform, he went to a hotel concierge. And since everyone now lived in peace, many tourists came to the hotel. Even the enemies of yore. Even the soldiers the former general had had under him.

The general, when they entered and left the hotel, would open the large glass door, make a ridiculous bow, and say:

And they, who recognized him, said to him with a very bad face:

– Has no shame? The service is terrible at this hotel!

And the general was flushed, flushed, and shut up.

Because now it was worth nothing. Umberto Eco The Bomb and the General Lisbon, Quetzal Editors, 1989