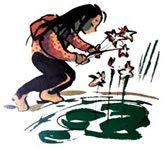 Yoko makes the package very carefully. Light in color and well-bent corners. Finally, he ties the gift with a golden cord and in the middle glues the Y of his name. Tomorrow is August 6, so today you have to go visit your old aunt, grandma’s sister. A woman who never had a husband or children. Not lucky.

Wrapped the gift, Yoko already thinks of one thing: how not to touch her aunt? She hates to touch her because of the “prune”, that brown, wrinkled stain on the old lady’s right hand. Parents insist that she come closer … And this year, for the first time, Yoko goes there alone. Parents have both even more important work meetings than this annual visit. Yoko protects the package with a cloth, puts it in a paper bag, and puts it in her backpack. Likes to respect your personal habits. Before leaving, she still puts the letter from her San Francisco correspondent in the bag, and then she goes to meet her old aunt Tsukiyo. Walking down the long street that leads to the bus stop, Yoko tells her buttons that no other name would have fit her aunt better. Tsukiyo means “moonlit night”.

– This woman is at night and is totally on the other side of the moon! Do you think this is normal, dear titmouse?

The titmouse takes off. The bus arrives. Yoko rises at a very determined pace. This year will tell Aunt Tsukiyo the truth. And you’ll find out something else: You finally want to know if you like this old lady or if you really don’t like her at all.

Yoko bowed several times before the old aunt, who waited patiently standing in the shadow of the great ginkgo, the emperor of the park trees. Then, Yoko approached the head that Tsukiyo stroked with the right hand and also with the left. And without saying a word, Yoko leaned back several times, holding hands together. All around is green and flowery except the sky, which is blue and cloudless. The old aunt always wears a delicate gold thread around her neck with her natural pearl, white as a little moon. Yoko smiles. Arm in arm, the old lady and the girl begin their annual outing. They greet the growing trees, and the birds born after the last meeting.

– If the lotus flowers opened. Yes, my aunt.

Yoko knows by heart the path of the small lotus pond. He wants to question Tsukiyo once again about the city and his life. And finally telling her the truth, but the roses smell so good along the ride….

– Maybe we are lucky enough to see one today…

– A nightingale, my aunt. Perhaps. But… tell me earlier, Aunt Tsukiyo, why my correspondent was so afraid when I told her the name of my city: Hi-ro-xi-ma.

Yoko takes the letter from the bag and insists:

– Oh … it was war, my dear Yoko! She replied, smiling. – The war of yore. The soldiers of Japan were warriors and there was so much lack of rice! Fortunately my father was a brave fisherman! The sardines jumped into the boat! Sometimes even oysters brought, the best oysters in Japan, our beautiful Hiroshima oysters. But I would rather sell them. A piece of fabric cost a lot of oysters, you know?

– But then… what about the bomb? Tell me, Aunt, that you finally remember everything that happened that year…

– Yes, my Yoko, I remember the planes that bombed the cities of Japan, those around Hiroshima. The wooden and paper houses burned so easily…

“I was ten, and I was kidding for grains of rice in the garden gravel. And when he found one, he would say to him, “Quickly call your friends, Little Grain of Rice,” just like in the storybook, the first one who could read on her own.

Tsukiyo is silent. It seems to look far away, far beyond the tired brain. Then slowly picks up:

– It was breakfast time on the 6th of August. Some sardines and hot water. Tuna was for the rich…

I looked into the sunlight. The clouds told me every morning if the day at school would go well for me. “Sunlight” is how your parents baptized you, my Yoko.

“Thank you, Aunt, for finally remembering everything today.” And at 8 am and 15?

– The clouds told me: “Good grade to Sciences!”. The sirens woke up those still sleeping. The planes arrived. And a strange bomb fell, fell, fell, fell… but luckily our rooster crowed from the top of his firewood, it was the year of the rooster! It woke up the flowers of our two cherry trees that immediately began to multiply, to grow, to grow, to grow… A cherry blossom carpet covered our dear city of Hiroshima… And the terrible bomb landed softly on the branches, barely touching some petals that didn’t even crumple.

– You’re lying, Tsukiyo! You are always lying! Because it was on our earth that it fell, that damn bomb…

“You shouldn’t worry, my Yoko, because all the cranes in our dear Japan have returned … They were watching over there in the air.” The cranes put themselves on top of the cherry trees and the stronger one picked up the bomb with its nozzle to carry it away…

“What about your two brothers and your father who died at the same time at 8:15 with the bomb’s atomic heat, Aunt?” What about the vegetable vending machine and your teacher and his three daughters who died long afterwards from the burns? And the prune on your right hand, old aunt Tsukiyo?

Without changing her smile, her aunt rests on the railing of the small wooden bridge. Yoko grabs both her shoulders and speaks louder:

“It’s as if the sixty volcanoes of our islands all exploded at once, that’s the reality!” Aunt Tsukiyo, I beg you to be serious!

“The cranes, my Yoko, flew over the cherry trees, the cypress trees, the blackthorns, and it was over a creeper flower that they set the bomb. It was so far from the big black plane that it looked tiny, the bomb, like a lost boy in the woods! Carried by the morning dew, the creeper flower slid into the waterfall, which took it even farther…

“But what about my teacher, who tells us every year about the abominable photos, how was the nuclear explosion?” And the lotus and white camellia branch that I take with my parents every year to the city’s memorial and… my correspondent who lives in a place where the cranes never went and that she nevertheless knows she [ 19459001]

– What I do know is that you lie to the young ones!

Tsukiyo smiled as if no word had the power to disturb the tale he invented to protect himself from the ugliness of the world. Then tirelessly resumes:

“At the foot of the waterfall that fell into the sea, there were, you know, my Yoko?”

“Yes, Aunt, you’ve told me a thousand times!” There was a stupid sunfish! I hate the sunfish. They are deadly!

“Sunfish from our waters are dangerous to humans,” Tsukiyo says. But he wasn’t afraid to swallow the bomb the flower carried. An old tortoise and a brave fisherman encouraged him. Then the fish dived into the deepest sea and placed the bomb in the hollow of an oyster, the farthest oyster of Hiroshima. There it turned into a round, white ball like the moon. A pearl.

The aunt tells, and a tear wells up in the corner of Yoko’s eyes. It cleans it. Tsukiyo and Yoko then arrive at the foot of the small lake. The lotus is flowery, open and bright. August is your season. The sky is as blue as it would have been on August 6, 1945. Yoko is unhappy. But I smile at the flowers that look at her. Then he contemplates his old aunt who looks into the distance. Take her by the arm. The sun begins to softly fall. Women and men in white coats walk around the park, telling the time and advising people who walk there not to be too late.

On the mat of the little pink room, the old aunt unrolls a napkin with two red bean cakes. Put them aside for Yoko during their meals last week. Yoko opens her backpack and takes out the paper bag that holds the gift wrapped in a cloth. Both smile and Yoko helps Tsukiyo to open the package. The aunt must think that this is once again a cup of tea.

– How beautiful! What a memory of yours, my Yoko! You have not forgotten that I make a collection. What a fine porcelain! Oh! How beautiful the rooster drawing on the tree!

“In town, they sell them everywhere, my aunt.” It’s again the year of the rooster, you know, the rooster.

Yoko had put a bag of mountain green tea in her cup.


Yoko left after long saluting to her old aunt. In his bedroom, Tsukiyo pulls out a wooden box that rests on the floor. With his right hand he takes the cup of the rooster emblem and, from above, drops the cup and lets it fall, fall, fall … Broken the bowl with all the violence, Tsukiyo picks up the shards and puts them in the box together. with those of dozens of other cups of tea, of other torn bags. And keep looking. No cherry trees, no cranes, no sunfish, have ever prevented their cups from exploding. When they knock on the door, the old lady has her eyes fixed on the crumbling rooster.

A woman dressed in white pokes her head out and says gently:

– Oh, it was certainly my father who fished it, I’m going to…

All visitors left the park. Yoko was the last to leave, having secretly harvested a sprig of lotus and white camellias. The mental hospital has closed its doors on its patients, their ghosts and their docile sunfish. Seeing the employee lock the wooden gate, Yoko wonders if she has the right to tell her parents that the old aunt is crazy. They always said “tired”, “head in the air” and “dreamy”. She, she thinks you have to be really crazy to say what Tsukiyo says.

On the bus, Yoko also wonders whether or not she likes the old prune aunt in her hand. I would like to say to my classmates one day, “My aunt is a survivor. She may come to bear witness. What she says is very hard, you see!”

When the bus starts after leaving Yoko, a titmouse lands on the sidewalk. Yoko, smiling, asks him:

“Do you think mountain green tea can cure an old aunt?” In a year we will see! Alain Serres Hiroshima, by a Cerisiers and a Poisson-Lune Paris, Rue du Monde, 2005 (Translation and adaptation)