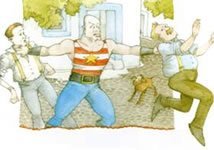 There was no stronger man than the Gutierres. Anyone who doubted had nothing but to buy a ticket to watch the show at the Little Stars & Stars Circus, where Gutierres was presented every night as the brightest star of the company.

“And now, ladies and gentlemen, girls and boys, I have the pleasure of introducing you to Gutierres, the Strongest Man in the World,” shouted the circus director, Estrelinhas & Estrelinhas, in a great abundance of gestures.

The Gutierres appeared, showed the battered muscles, filled the breast with air and began the show. It was amazing. Without a single drop of sweat falling from his face, he bent thick iron bars, smashed marble slabs, and lifted one-hundred-pound weights … – lift one-hundred-pound weights with your little finger, just calculate! Of course, the audience applauded Gutierres’s skills very much. And asked for more. And it was angry. And shouted cheers.

But the colleagues of the Man of the Forces, the other artists of the Circus Little Stars & Little Stars, did not like him. They found him vain and rude, always wanting to show his strength, frightening those who were weaker. For unimportant things the Gutierres rushes:

– With a blow I start you spinning!

– With a punch I make you powder!

And always the same threat:

– Let no one challenge my strength …

Also, he was little friend of will-making:

“Because I’m the strongest, don’t think I’m willing to work for others.” It was what was missing!

Go on, one day, Gutierres lost its strength. She was picking up a suitcase with weights inside and was unable to. He tried, tried again, but there was no way. Their forces had fled. Where? Did not know.

That night, as usual, the Company director, in red tuxedo, blue trousers and big bow, half red, half blue, extended his right arm toward the artists’ entrance and shouted enthusiastically:

“And now, ladies and gentlemen, girls and boys, I am pleased to introduce you: Gutierres, the Strongest Man in the World.”

But Gutierres didn’t show up. He lacked the strength to show so many people that he no longer had the strength.

Since no one was about to clap the Weakest Man in the World, Gutierres followed the circus caravan of Little Stars and Little Stars and stood by the very disconsolate roadside wondering how that had happened. With his eyes on the ground, he noticed an ant that was pushing hard on a breadcrumb crumb twice its size. The Gutierres handed her a straw and helped her carry the livelihood to the edge of the anthill.

– What a force! Exclaimed the ant. – Well hajas!

Ahead, a sparrow was trying to pluck a ripe and appetizing grain from a spike of wheat. The grain was very secure. What a setback. And the sparrows in the nest waiting for breakfast …

Gutierres came and, in an instant, undid the ear of grain, which he gave to the sparrow.

– What a force! She said gratefully.

There, to the sides of the bush, a sheep gave a bleating, as if asking for help. It had fallen into a grave and could not climb to the top. Gutierres came to her, who lifted her in weight and laid her on the path leading to the corral.

Continuing on his way, the Gutierres entered the village and saw a girl bent under the weight of a bundle of wood.

“I’ll take that to you,” Gutierres said, and slung the beam over his shoulder.

He left the bundle of firewood at the girl’s door and went through the village inside. In the square, two men buzzed. Heavy words mix with even heavier punches. They rolled on the floor, covered in dust and hate. Gutierres came and grabbed them. With his right hand he pulled one side, with his left hand pulled the other side. And he stood among them.

– So what’s up? Asked the conciliating Gutierres.

“He was making fun of me,” one of the men complained.

“And he said I was a fearful man,” complained the other.

“Do you think your strength is to lose yourself in worthless fights?” Have some sense, and if you want to argue, sit down talking with a table in between, ”Gutierres told them as he dropped them.

– That guy has strength for ten. How easily he separated us …

The Gutierres heard them and shrugged:

“I haven’t heard anything else today.” Everyone tells me that I have the strength, but after all, I walk here looking for the strength that has escaped me. Who understands this?

It was noon. A bolt of sunlight slammed down on Gutierres’s head and suddenly warmed an idea he had kept there, without realizing it.

“Yes, the ant, the sparrow, the sheep, the girl, and the two men were right.” I am really strong. There it is: as long as I help the weak and those who need my help, I will always be strong. It is! It is!

And he started running the way he had come.

The story ends here. It is only worth knowing that, in the Estrelinhas & Estrelinhas circus, the most delicate artist and friend of the will is now Gutierres, the Strongest Man in the World. António Torrado Thirty for a Line Porto, Civilization Publisher, 2008