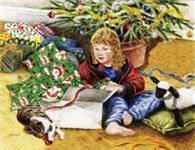 “The gray cat looks bad,” Laura observes, perched high on the small wall that separates the garden from the wasteland. But Dad is cutting the hedge and doesn’t hear what she says.

Her mother does not listen, too busy pulling herbs from the sidewalk, which Laura must be doing to help her, too.

Then Laura repeats to herself in a low, low voice:

“Looks like the gray cat is going to die.”

The nameless cat and no house have drooping fur and slow jumping; It doesn’t care about birds, it’s not hungry anymore, it runs away from the sun and shelters between two feet of nettles.

“You need to call the vet,” Laura suggests.

– Don’t even think! He has more to do than treat stray cats.

This time the mother had always decided to answer.

“It’s not a bummer because I welcomed him and I like him,” Laura said.

Laura only does what she likes. Tomorrow, on his way to school, he will knock on the vet’s door, as he did last time because of a bird that had fallen from its nest and a hedgehog half-crushed by a bicycle. She’s a very nice old vet who doesn’t have her going for a walk.

“Tomorrow I’ll hide the cat in my folder, it’s decided.”

The next day, she can’t find the cat anywhere, and it’s about time to go to school. Laura then goes without the cat. Knock at the vet’s door for advice.

But it is the woman who comes to the door and gives him a dry answer:

– My husband is flooded with work.

During the midday recess, Laura slipped out of the yard. If only the teacher knew! If the mother saw her! Laura knows she can be suspended for three days: “What a lack of responsibility!” She knows, but the gray cat looks so bad …

What a surprise! It is a young boy who comes to answer.

“My father will retire, and I will replace him,” he explains gently, seeing Laura’s astonishment.

She stammered when talking about the cat and the vet quickly understood:

“This afternoon, Laura, I don’t have much work, so I’m going for a walk that way.”

After four o’clock, returning from school, Laura found a note that her mother read to her:

Am sorry! I had to help your cat leave without suffering too much… It was a pity, but it was better for him. Whenever you want …

– You have a new friend. Sérgio is a strange name that makes me think of the fabric of the coat I wore when I was your age and that …

But Laura had no desire to hear her mother’s memories. She went to cry alone on the small wall. She wondered where Sergio had taken the dead cat. It seemed to him to have seen him, gray and bright-haired, slipping through the tall grass; You know it was an illusion. Then the scared cat-scarlet returned to the terrace, and Laura laughed at her eager pecks. He jumped quickly from his observation post to fetch fresh crumbs.

Next to the Christmas pine is a bouncing gift. Contrary to usual, the mother suggests opening Christmas presents before rooster mass. Laura doesn’t even want to believe it. There are a lot of things to change in this house from a while ago. Maybe since his father “was at death’s door,” as Grandma says. Laura learned that this means escaping death. Had she suspected the severity of her father’s health, found her passed out in the garden while she was in school?

However, he is here tonight, his father alive and laughing, when his mother shows Laura the gift that moves: a gray kitten.

– Looks like son of the gray cat. Tomorrow I will soon introduce you to Sérgio. Colette Nys-Mazure Contes d’Espérance Paris, Brouwer Desclée, 1998