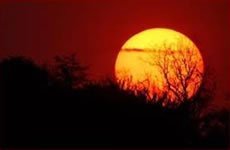 Once upon a time there was a blind man living with his sister in a cabin in a village on the edge of the forest.

He was a very smart man. Though his eyes saw nothing, he seemed to know more about the world than people whose eyes were piercing as darts. He used to sit outside the cabin talking to those who passed by. If they had problems, they would ask him what to do and he would always give them good advice. If you wanted to know something, your answers were always right.

People shook their heads in wonder:

The blind man smiled and answered:

– Because I see it with my ears.

One day, the blind man’s sister fell in love with a hunter from another village. Soon they got married. When the party was over, the hunter came to live with them. However, he had no patience for his brother-in-law. Asked:

“What good is a man without eyes?”

“But, husband, my brother knows more about the world than the people who see.”

“And what can know who lives in the dark?”

Every day the hunter went to the forest with his bow and arrows. Whenever he returned in the evening, the blind man would ask him:

– Take me with you tomorrow.

But the hunter didn’t want to:

“What good is a man without eyes?”

Days and months passed and the blind always asked:

– Take me with you tomorrow.

And the hunter always refused to grant the request.

One night, however, he was in a good mood. He had returned with a very chubby gazelle. The woman had prepared dinner, and after the meal the hunter said to the blind man:

– Tomorrow, you can come with me.

The next morning they left. The hunter led the blind man by the hand and walked for hours among the trees of the forest. Suddenly the blind man stopped and tugged at his brother-in-law’s hand.

The hunter looked around but saw nothing.

“A lion is there, but no problem.” Already ate and fell asleep. It will not hurt us.

They continued walking and saw, in fact, a lion sleeping under a tree. After passing him, the hunter asked:

– Because I can see with my ears.

They walked for a few hours, and again the blind man stopped and pulled his brother-in-law’s hand.

– Psst, there is an elephant there!

The hunter looked around and saw nothing.

“An elephant is there, but no problem.” You are taking a shower. It will not hurt us.

They walked on and passed the elephant, who was taking a mud bath in a pool.

After passing him, the hunter asked:

– How did you know about the elephant?

– Because I can see with my ears.

They continued into the woods until they came to a clearing. The hunter said:

And set a trap, teaching the blind to set another. When they were both ready, he said:

“We’ll be back tomorrow to see what we got.”

And they returned to the village.

The next morning they got up early and headed for the forest. The hunter offered to guide his brother-in-law, but the blind man would not.

“I already know the way,” he explained.

The blind man went ahead, without putting his foot on a root or tripping over a tree trunk. Nor did it deviate from the path once. They walked for hours until they reached the clearing where they had set the traps.

The hunter saw as soon as there was a bird in each of them. Her bird was small and gray, but her brother-in-law’s bird was a true beauty, with green, red and gold feathers. The man said:

– Sit here. Each of us caught a bird and I’m going to get them out of the traps.

The blind man sat down while his brother-in-law dismantled the traps. As he did so, he thought to himself, “A man without eyes will not notice the difference.”

What did he do then? He gave the small bird to the blind and kept the big one for himself. The blind man picked up the gray bird, got up, and headed home. As they walked, the hunter asked:

– If you are so clever and see with your ears, answer me: why is there so much anger, hatred and war in the world?

“Because the world is full of people like you who steal what is not yours.”

Suddenly the hunter felt very ashamed. He took the gray bird from his brother-in-law and gave him the colorful bird.

And as they walked, the hunter asked:

– If you are so clever and see with your ears, answer me: why is there so much love, kindness and kindness in the world?

And the blind man answered:

“Because the world is full of people like you who learn from their mistakes.”

And after much walking, they finally reached the village.

From then on, whenever the hunter heard someone ask, “Blind man, why are you so clever?” He would put his hand on his brother-in-law’s shoulder and reply:

– Because it sees with the ears and listens with the heart. retold by Hugh Lupton Tales of Wisdom and Wonder Bath, Barefoot Books, 1998 (Translation and Adaptation)