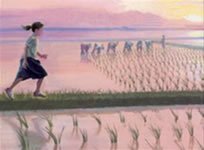 In the village of Sofia, the sun is very bright and always very hot. It rarely rains, but when it does, the rain falls uninterrupted days in a row.

It was a scorching day, and Sofia could not open her eyes in the bright light. A stillness hung in the air when suddenly there was a noise like the buzzing of a swarming bee bee. The pig began to grunt and the chickens to cluck. Sophie wanted to see what was going on, and sitting straight like a broomstick, she listened. Must be the numbers man’s van, she thought as she rubbed her eyes.

Once a year, a city man came to the village in a red van. The village people said it was the man of numbers. The man counted the villagers at the behest of the government. After making his way, the man stopped in front of Sofia’s house.

– How many people live here? – He asked.

The number man had heard that Sofia’s father had died because there was no doctor in the village and no hospital nearby.

Sofia stared at the man’s shoes.

Sofia flushed. The secret, which had been cherishing for so long, completely occupied her mind, which flew as far as hawks fly in large circles in the blue skies. In her heart Sofia felt that if she ever had shoes like this man’s, her wish would come true.

– Shall we go to the river bank? Said the number man. – Put your feet in this mud of fine clay. Now get out!

Sophie liked the feel of mud seeping through her toes. The man took the ruler from his trouser pocket and measured Sofia’s footprints. While scratching his beard, he did his math out loud and eventually said:

Sofia counted the days… Some time later, the courier van drove through the village and left a package at her door. After hurriedly opening the package, he shouted:

He put them on very carefully and exclaimed:

“Now I can fulfill my secret wish!”

– What wish? Asked the mother.

“But, my dear, the school is five miles away and the road is very bad!”

“I know, Mom, but I have some sneakers now…” Sofia replied as she jumped with joy.

A smile slowly began to draw on Sofia’s mother’s mouth. She remembered her daughter in the yellow, sun-drenched dress running beside her father, who, with the small black slate under his arm, sought the shadow of a coconut tree. He remembered his daughter, staring unblinkingly, looking at the slate where her father made doodle letters he called letters: “This is your name and this is the name of our village,” he taught Sofia.

“I think you can go to school,” her mother told Sofia.

The next day, the sun had not yet risen, and Sofia was already eating a bowl of rice with salted fish and was on her way across the paddy fields. The sneakers protected her from the sharp stones. And it ran like wings on its feet!

With one leap he crossed streams and crossed a deserted road where only one car passed from afar to far. Sofia ran and ran, faster and faster, until finally she saw the school that had only one classroom.

The students’ sandals were lined up by the front door. Sophie quickly took off her ballet flats, put them next to the other sandals, and went barefoot into the classroom.

– My name is Sofia and I come to school to learn to read and write!

In the room, where there were only boys, giggles began soon.

– Silence! Said the teacher, placing her finger on her closed lips.

– Come here, you’re very welcome. Tell me, where do you come from?

The teacher, taken by surprise, said in a muted voice:

– But this village is five miles from here!…

– Yes, lady teacher, but I have my shoes!

The boys continued to giggle, covering their mouths with their hands. Sophie’s eyes filled with tears.

– But, you’re a girl! Whispered one of the students.

Sophie swallowed all the rage she felt and kept her head high and quiet as the snake before attacking her prey. Soon the time for rematch would come.

After class, Sofia put on her sneakers and tied her laces with a triple knot. So he turned to the boys, looked them in the face and said:

“Since you are so clever, come and grab me!”

The boys, pushing each other, soon began to run after her. In vain.

The next morning, Sofia woke up before the rooster crowing. Leaving so early allowed her to be the first to get to school. The boys were coming with an embarrassed smile … They had not yet forgotten defeat in the race yesterday. And from that day, Sofia learned a lot in that one-room school.

A year has passed. One morning Sofia was sitting next to her mother when suddenly a cloud of dust rose on the slope. The pig began to growl. The chickens clucking. It was the man of numbers returning in his red van.

At that moment the first raindrops began to form small circles on the surface of the river’s water, circles that widened more and more. The monsoon began. Sophie looked at the gathering clouds and thought that now there would be less heat on the way to school.

The man of the numbers told the people of the village, and at the end of the day came to Sofia’s house. And looked at the girl’s bare feet.

– Where are your sneakers? – He asked.

Sophie smiled and with an air of defiance and hands on her waist said:

“I just put on my sneakers to go to school.”

And they both started laughing.

“Today I want to show you something,” Sofia said. – Come with me please.

They walked together in silence to the river bank. Once there, Sofia, with her head down, said shyly:

– One day, I want to build a school in my village, and…

“I want to be a teacher too,” Sofia said.

He took a bamboo cane and grasped it with both hands, wrote in the mud of clay:

Thank you so much for the sneakers.

Now I can read and write.

And there was such a silence that you could hear the water bubbling through the pebbles. Frederick Lipp The deportive zapatillas of Sofia Barcelona, ​​Intermón Oxfam, 2007 (Translation and adaptation)