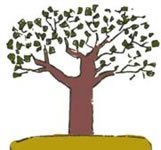 Once upon a time there was a tree that had very, very beautiful leaves.

In fact, it was such a beautiful tree that if one focused on looking at it for a while, its leaves ached a little.

The animals that lived nearby never tired of admiring the tree, and even some who lived farther and busier in their daily chores often invented a detour just for the pleasure of looking at it once more.

Olga, the tortoise, the rabbit Fialho, the fly Francisca (who was always sneezing), the twins Birdies, the cat Renato, the gecko Tuxa and the toad, the frog, just to mention a few, all preferred to eat the snack in the shadow of the while talking about the leaves of the tree and measuring the incomparable beauty of its branches.

And even the old goose named Lourenço, who never appreciated anything at all, when looking at those leaves seemed to begin to like a little something.

Because it must be said that the tree had a strange effect on everyone. For example, the Francisca fly, which was always constipated, if it looked at the leaves for a while, stopped sneezing. Aesop the frog felt tall and elegant. Rabbit Fialho was no longer afraid of falling off his ears, and Renato the cat swore that when he fell asleep under the canopy, he had wonderful dreams.

It was said that a long, long time ago, an ancient frog that had lived there, probably an Aesop great-grandfather, had become a handsome prince by looking at the leaves of the tree.

But no one knew for sure.

There was above all a boy, Justin, who had been thinking all day when he might run to look at the tree. And it didn’t occur to her that these leaves might ever disappear.

Here there was often a late afternoon wind blowing from the north, and it was at this point that Justin most enjoyed watching the tree swaying the branches.

So if he had some free time, rain or shine, he would come and look at the magnificent leaves until his heart ached a little.

And the whole world went to watch the little new shoots that were now emerging on the branches of the old tree. The tree was of evergreen foliage: the leaves kept the bright colors of May at the end of the year, and only at the summer solstice did they turn orange at the tips, so slight that it could only be a figment of the boy Justino’s imagination, for only he , who was the most observant of all, seemed to notice this. Not even Beaver Hector, owner of the whole mountain and proud owner of his own tree, would not even give in to the difference, were it not for the conversations he had with Justin on his way to the river where he lived and near the boy’s house.

Now there was also in this place someone who, like everyone else, loved the tree, but he had to keep running from side to side: it was the horse Gonçalo. He said that just looking at the leaves of the tree ran faster than the north wind.

And one day he remembered to make a proposal to beaver Hector, which was as follows: since he could not stop there for more than ten minutes and had to keep running, he proposed to the beaver. a leaf that, in his travels, would remind him of the tree and perhaps gallop faster.

The beaver did not have to meditate much on the subject. He thought it was a great idea, and not only did he sell the horse Gonçalo a leaf for a hundred, but he began to think that he could dispense more leaves to the other animals, who would surely like to be able to remember the tree at any time of the day or so. of the night.

And it was a great event in that place, that day when the beaver put up for sale the prodigious leaves. Animals came from all over the place, making a long line that stretched beyond the river, because no one wanted to miss the opportunity to take such a sheet home, and that was indeed a great deal in which everyone was winning.

The frog was thrilled with the idea of ​​sunbathing floating on its soft leaf over the waters of the river; the fly Francisca said that from then on, if it always flew with a leaf hanging around its neck, it would surely no longer sneeze; the tortoise Olga got a hat that went beautifully with the shell; and the gecko Tuxa ate its leaf and shone like a spotlight for three days. They were all very happy, and the happiest of all was the Hector, who overnight became a rich, very rich beaver, indeed the richest beaver within a twenty-five mile radius.

Only no one was prepared for what happened the next day.

It was as if the whole world had been saddened at once.

The animals looked up and could not believe it.

The meetings around the tree are over. No one was snacking there anymore. Some animals had even lost their appetites and stopped eating at all, and were thin and sad and nervous.

Needless to say, the cat went to sleep elsewhere.

It was an ache to look at the tree like that without charm.

The animals were now turning to avoid that bare trunk, and the separate leaves served only to remember and heighten their displeasure.

The sadness was so great that Beaver Hector, who could not even look at the tree, thought he must do something.

To the desolate boy Justin, it seemed impossible to put the leaves back in their proper place, but the beaver wanted to go back and tried to buy them all back.

Only the leaves, however, had aged, nor did they look the same. And some could not return: for many animals the time had come to emigrate far away. Others had resold their leaves to the gecko that ate them every three days, because it was pleasant to feel illuminated from within, like a spotlight.

A few days passed; the beaver sat counting his money, which was precisely ninety-nine hundred, when he had an idea.

There was a note for each of the leaves torn from the tree: perhaps one could brighten the mood a little by placing the notes in place and instead of the lost leaves.

She borrowed a ball of baraça and, with the help of the cat Renato and the twin birds, began to tie the banknotes to the twigs, and the tree suddenly found itself adorned with all those colorful little papers. The animals came back to see.

“It’s a bit like the Christmas pine,” said Rabbit Fialho.

At least it distracted them a little from their hurt.

The time has changed.

The days of rain, cold and heavy skies had come.

And it was on the very night that the beaver fanned his tree that the northern wind rose, stronger than ever, sending the banknotes far away, scattering them across the country.

And the beaver Hector could do nothing but watch, with his mouth open, at the disappearing sight of mountains and valleys to the southwest.

After the months of bad weather, when the animals began to come out more often from their homes, then something happened that was forever in everyone’s memory.

It all started when, on the morning of a very blue sky, the goose Lourenço, hitherto always so circumspect, rushed out to warn every agent: “The leaves are being born again!”

There was also something no one could count on: the new leaves grew strong and healthy, but … they were completely different from the first! They had another shape and new colors and even a new aroma.

But that did not discourage anyone.

On the contrary, everyone was delighted with the new foliage that was now growing, leafy, in plain sight.

And it was believed that these new leaves were magical as well.

The truth is that they were beautiful. In addition, they looked so appetizing that it was necessary to put the Lawrence Goose guarding the tree to prevent the Tuxa gecko getting too close.

Also Justino was very happy when he saw the tree, but being the smartest of them all, he knew that it was not the same thing. Despite the beauty they radiated, these were not the first leaves, now only in his memory, and if he closed his eyes tightly enough, they still ached a little in his heart. Miguel Veloso The tree of the leaves that hurt Porto, Campo das Letras, 2003