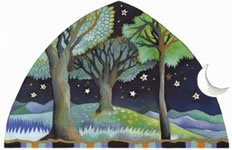 
On the top of a mountain three small trees were born one day. In the early days they were so fragile and green that they mingled with the grass and flowers that sprang up around them.

But spring after spring, his little trunk was getting stronger every day. And they bravely faced the autumnal and winter challenges that further strengthened them. From the top of the hill they contemplated the world and dreamed of what they would be when they were big.


The first tree stared at the stars that sparkled like diamonds in their black evening dress. And he said:

“I would most of all like to be beautiful and to keep a treasure. I would like to be covered with gold and contain precious stones.

The second tree overlooked the river that wound down the mountain and made its way toward the sea. Water flowed through the pebbles and no one could stop it. And he said:

– I wish I was strong. Be a great boat! Sail the immense seas and transport powerful captains and kings. Be the strongest galleon in the world.

The third tree overlooked the valley that stretched at the foot of the mountain, and looked out over the far city, where people moved. And he said:

– I don’t want to leave this mountain. I want to grow so big that people stop looking at me. They, looking up to heaven, will think of God. I will be the largest tree in the world!


Three lumberjacks with their axes


The years passed. The rain fell and the small trees became three tall and imposing trees.

One day three lumberjacks climbed the mountain with their shoulder axes. One of them looked closely at the first tree and said:

– It’s a beautiful tree! Is perfect.

A few minutes later, after a few axes struck his trunk, the first tree fell to the ground. Then he thought, “Now I am about to become a magnificent safe.”

The second lumberjack looked at the second tree and said:

– This tree is vigorous and solid. This is precisely what I am looking for. He raised the shining ax in the sun and felled the tree.

The tree thought, “I’ll be an important ship. I’ll sail the vast oceans!”

The third tree felt its breath catching as the lumberjack fixed it. This one said:

He raised the ax, and a short time later the third tree also lay on the ground.

Its beautiful branches, which until recently served as shelter for birds, were cut off one by one.

The three cut logs rolled down the slope to the plain.


“Why does this happen to me?”

The first tree rejoiced when the woodcutter took it to a carpenter. But the carpenter did not have precisely the idea of ​​making safes. With his calloused hands he turned the tree into a manger for animals. The tree, which was once so beautiful, was not clad in gold or covered with jewels. It was full of hay to feed the farm’s hungry animals.

The second tree smiled as the lumberjack took it to a shipyard, but that day no one was thinking of building a sailboat. With great hammer blows and the saw, the tree was transformed into a simple fisherman’s boat. Too small, too fragile to navigate the oceans, the boat was taken to a lake. She was carrying fishloads every day, which impregnated her with an unpleasant smell.

The third tree was very sad when the woodcutter set it off to make rough beams, which he kept in the courtyard of his house. The tree asked:

– Why does this happen to me? All I wanted to do was stand high on the mountain and invite people to think of God.

And he remembered the time when he struggled with the wind on the mountain top.

Many days and many nights passed. The three trees almost forgot their dreams.


A child, a traveler, a convict


But one night the golden light of a star stroked the first tree with its rays, just as a young woman of infinite tenderness deposited the newly born boy in the manger.

“I would have preferred to make you a crib.”

The young mother smiled and replied:

– This manger is magnificent.

At that moment, the first tree realized that it contained the most precious treasure in the world.

Other days and other nights passed. Once, a weary traveler and his friends boarded an old fishing boat that had once been the second tree.

While the second tree, made by boat, glided quietly in the waters of the lake, the traveler fell asleep.

Suddenly, after lightning accompanied by heavy thunder, the storm broke out.

The waves of the lake were altering and the small boat shook. I knew I had no strength to carry, safe and sound,

to so many people, with that wind and the violence of those waves.

Concerned, the friends woke up the mysterious traveler. The man got up, stretched out his arms, shouted in the wind and said to the waters of the lake:

The storm stopped immediately and made a great bonanza.

At that moment, the second tree realized that it was carrying the king of the heavens, the earth, and the infinite seas.

Shortly thereafter, on a Friday morning, the third tree was very surprised when its rough beams were taken from the wood storeroom. They were transported in the midst of an angry mob, placed on the wounded back of a man, who was later crucified on them. The poor tree felt very bad. She cried as she held that poor bloody body.


When the sun rose


But on Sunday morning, when the sun rose in the heavens and the whole earth vibrated with immense joy, the third tree knew that God’s love had transformed everything.

He had made the first tree the marvelous vault of the most tender and incredible of treasures: baby Jesus. He had made the second tree a bearer of the Son of God across the lake. And every time a person thinks of the third tree in the shape of a cross, he immediately thinks of heaven.

And this was so much better than just being the most beautiful, the strongest and the biggest tree in the world. Pedrosa Ferreira Stories with Juice Porto, Salesian Editions, 1995