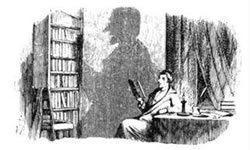 In tropical countries the sun burns in a terrible way! People turn dark like auburn and even dark like black.

Coming from his cold country, a sage had come to one of these warm regions, who thought he could walk there as in his land; but soon he was persuaded otherwise. He was forced, like any reasonable person, to close during the day at home. It always seemed asleep or abandoned. From morning to night, the sun shone through the tall houses along the small street where he lived. It was unbearable!

The sage of the cold countries, who was still young, thought himself a fiery furnace; but she was getting thinner and thinner and her shadow narrowed considerably. The sun was harming him. That is why he only revived after sunset.

What a pleasure, then! As soon as a candle was lit in the room, its shadow stretched across the wall and stretched as far as it could to the ceiling, as if regaining strength.

The sage, for his part, went to the porch, lay down, and as the stars appeared in the admirable sky, he felt himself reliving little by little. Soon people would come up on all the balconies, because even auburn people need air! How excited it was then! The cobblers, the tailors, all sprawled down the street. There were tables, chairs and thousands of lights. One spoke, another sang; strolled; the carriages circled; donkeys passed by ringing the bells; a dead man was thrown to the earth to the sound of holy songs; the boys threw petards; the church bells rang; In a word, the street was very lively.

Only one house, the one in front of the sage’s, gave no sign of life. But someone lived there, because, on the porch, wonderful flowers bloomed, which necessarily indicated that someone was watering them. At night the door was opened too, but inside, where soft music came from, it was dark. The sage thought that music was incomparable, but it might have been a figment of his imagination, for he would willingly find everything incomparable in warm countries – if the sun did not always shine. The owner of the house he lived in had told her that he was completely unaware of the name and condition of the tenant of that house, and as far as the music was concerned, he declared it horribly boring.

“It’s someone who continually studies the same stretch without being able to learn it,” he said. – What perseverance!

One night the sage woke up and thought he saw a strange flash on the porch of the neighboring house; the flowers shone like flames, and among them stood a tall, slender, charming girl who shone as bright as the flowers. This bright light struck the eyes of our man who rose suddenly. He went to remove the curtain from the window to observe the house in front; but it was all gone. Only the door to the balcony remained ajar, and the music continued to be heard. There was a witch in there! Who lived there? Where would the entrance be? The ground floor consisted of shops; nowhere was a corridor or stairway leading to the upper floors.

One night the sage was sitting on the porch; Behind him in the room a candle glowed; It was very natural, therefore, for his shadow to be drawn on the neighbor’s wall. She stood out among the flowers and repeated every movement of the sage.

“I think the only thing that lives in front of me is my shadow: how elegantly she sits among the flowers, by the ajar door! If she could come in, see what is going on and tell me!”

– We will! He invited, joking. – At least it shows that you are good for something: come in!

And he nodded in the shadow, and the shadow repeated the signal.

At these words the wise man arose and the shadow did as he did. The sage turned and the shadow also turned. But someone who had paid attention would have seen the shadow enter the neighbor’s door, just as the sage, in turn, entered his room, running behind him the curtain.

The next day, when he went out to drink his coffee and read the newspapers in the sun, he suddenly exclaimed, “What is this?” Where is my shadow? Was it really gone last night and hasn’t come yet? What a hassle!

Great was his annoyance, not because the shadow was gone, but because he knew, like everyone else in the cold countries, the story of a shadowless man, and if one day, when he returned, he told his own story, they would accuse him of plagiarism, a charge he in no way deserved. He decided not to talk about it to anyone. And so it did.

At night he returned to the porch, having placed the light right behind him, so that his shadow would return; but it was in vain that he stretched, cringed, and repeated the same word: “Come! Come!” The shadow did not appear.

This separation greatly tormented him; but in the warm countries everything grows fast, and after eight days, with great pleasure, he noticed that from his legs, while strolling in the sun, a new shadow came out. Probably a root of the old one was there. After three weeks, it had a decent shade, which, while traveling to the northern countries, grew to such an extent that our sage would even be content with half.

Returning to his country, he wrote several books about what the world is true, beautiful and good: and many years have gone by.

One day he was sitting in his room when someone knocked on the door.

But no one came in. He went to open and saw a very tall and very thin man, properly dressed and with a distinct air.

– Who do I have the honor to talk to? Asked the wise man.

“I figured you wouldn’t recognize me,” the man said gently. – It’s just that I made myself a body; I have meat and I wear a suit. Don’t you recognize your old shadow? You thought I would never come back. I was very lucky after I left him; I am rich and therefore have the means to redeem myself.

He clinked a bunch of trinkets attached to the heavy gold chain of the watch as his glittering fingers shot a thousand sparks.

“This is all extraordinary, but aren’t you an extraordinary man?” And I, you know, have followed your examples since childhood. Finding myself ripe to make my way in life alone, you threw me into it, and I reaped a great success. I wanted to see him before his death and at the same time to visit my homeland. You know, the motherland is always loved. Since I know you have another shadow, I now have to ask you if I owe her or you anything. Please say.

– It’s you then! Answered the sage. It is extraordinary! I would never think my old shadow would return in the form of a man.

– What debts are you talking about? Believe me, I’m happy with your luck. Sit down, old friend, and tell me everything that happened. What are you doing at your neighbor’s house in the warm country?

“I will tell you, but on one condition: never tell anyone that I was your shadow.” I intend to get married; my means allow me to support families and even more.

– Stay calm! I won’t tell anyone who you are. Here you have my hand: I promise you. A man is a man, and a word…

That said, the shadow sat down and, either out of pride or learning, placed the booted feet of varnish boots on the arm of the new shadow, which rested at its owner’s feet like a water dog. She was very quiet, impatient to hear how she could break free and become mistress of herself. CONTINUED … Hans-Christian Andersen Tales of Andersen Barcelos, Minho Publishing Company, 1959 Adaptation