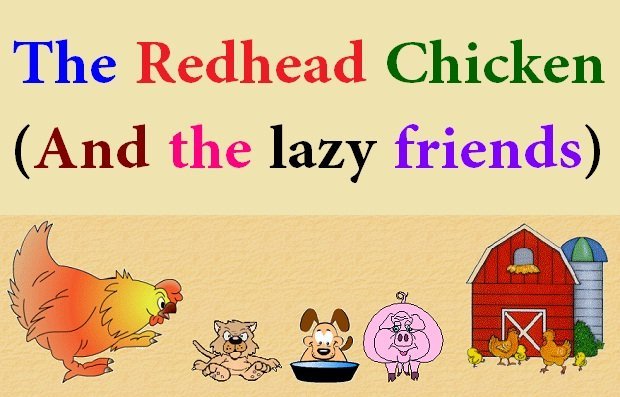 Was once a redhead hen who lived with her chicks in a farm. In late summer, she saw that the corn was ripe, ready to harvest and to become a good food and had an idea: “What if I make a delicious corn cake ?! Everyone would like! ”

It was hard work: she needed enough corn for the cake.

Now in the fifth lived other animals: dog, cat and pig. She came to them.

– Who can help me harvest the corn to make a delicious cake?

So the redhead chicken was preparing it alone: the grain harvested, threshed corn, ground flour, prepared the cake and put it in the oven.

When the cake was ready …

All were mouth water and were running.

Then the redhead hen said:

– Who was it that helped me to harvest the corn adn flour to make the cake?

All were silent. (No one had helped.)

– So who will eat the delicious corn cake is me and my chicks only. You can continue to rest.

And so it was: the hen and her chicks seized the party and none of the lazy invited.