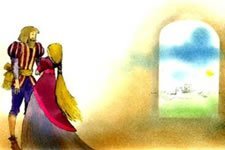 Once upon a time there was a princess who had lost her voice. What had been, what had not been, was not known. I didn’t speak, ready.

For the rest, it was the same as the other princesses. Even maybe more beautiful.

Too bad he didn’t get married. There was no shortage of suitors, all noble and distinguished young men, but the princess scowled as soon as she saw them and it was all said.

The king, the princess’s brother, was very sorry for her, and he would be able to cure her of that strange evil. And I would also like her to marry and be happy.

One day, they announced that a foreign prince’s entourage from far away was approaching the palace to pay homage to the king and princess.

“Another suitor,” commented the court nobles.

“Another grimace of the princess,” commented the court nobles.

The prince was in a great mood. Not a bit of the face was visible to him. Only the eyes.

After meeting with the king, he was introduced to the princess.

“My dear sister, this prince from distant lands has expressed to me, with very good reason and promises of covenant, his deep desire to marry you.

This said the king to his sister. And continued:

“The proposal struck me as so interesting to our kingdom that I see no reason why you should ever oppose me again. So many were your faces to the previous suitors, that I do not tolerate one more refusal.

The princess, frowning, pursed her lips. She was mute, but not deaf and not at all pleased with what she heard. Never had his brother addressed him so severely.

“This time, when the prince approaches you, to declare himself, you must offer him your best of smiles,” the king recommended.

There was nothing to predict that such a smile would awaken the princess’s wrathful, angry face.

Came the prince with a blunt face.

“He does not seem to be endowed with great beauty, but he will certainly be a good husband,” he whispered.

The cloak that hid it fell to the prince. A thrill ran through the room, full of courtiers. The prince was a monster. Nothing ugly ever turns around.

“I present to you your fiance,” the king announced.

– Not! Shouted the princess. – No no and no! How horrible.

After uttering these words, the princess fled the room and took refuge in the bedroom.

“But you did,” said the monster prince, peeling off his monstrous mask.

He was, after all, a very good-looking boy. Between him and the king there was a combination. The young prince, on a previous visit to the palace, had suffered the humiliation of being turned down by a scowl from the scornful princess. She deserved another even bigger grimace. That’s what the prince did, showing him the caraça. Love can a lot.

“The loss of the princess’s speech would have been frightened,” explained the former monster prince. Only another big scare could cure her, as it turned out.

There was party in the palace. The princess, yes, no, left the room and came to peek. Wasn’t he shortly after saying yes to that prince in love? António Toasted www.historiadodia.pt