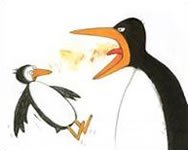 This morning Mummy screamed so much that … it broke me all.

My head flew into space.

My body dove into the sea.

My wings got lost in the jungle.

My beak disappeared into the mountain.


My buttocks landed in the center of town.

My paws did not immediately leave the site, but suddenly

it was “paws for what I want you”!

I wanted to look for them, but I had my eyes in space.


I wanted to scream, but my beak had disappeared into the mountain.

I wanted to fly, but my wings had been lost in the jungle.

Tired of running, my paws finally came to a halt in the Sahara Desert when an unsettling shadow spread over them…

I had found all my other pieces

and sew each other up.

In an instant, he took my paws and added them to the rest.

– Sorry, my little one! – said to Mamazanga,