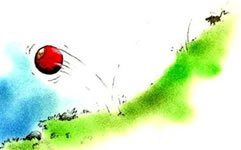 But let’s get to the story, which is late.

Once upon a time there was a round, red Flemish cheese, yet to be started. It was hanging from a tree, because in the silly stories cheeses are born and grown on the trees. It was a very ripe, almost falling, mature cheese that was. And fell.

It fell, but did not spread because it had a hard shell. He fell and rolled down the slope. So went to a tarmac road, with great flooring for Flemish cheeses.

Always wiggling, he passed a dairy, where were lined with many cheeses from the mountains. The dairy owner saw the Flemish cheese free, jumped off the counter and started running and shouting:

Unfortunately, he slipped on a shell, perhaps cheese, and plopped to the floor. They began to laugh at the cheese in the shop window and laughed until they all drooled. They were still fresh cheeses.

Beyond was a regiment to pass. The horns, swords, and buttons glowed. There is never a lack of sun on these occasions.

The Flemish cheese came, skipping the frog, and the march crashed to the floor, as if giving it a fanatic.

– We are being attacked! Shoot him! Shouted the officers.

But they didn’t shoot in time. The Flemish cheese had slipped down a slope, tucked into a ladder, and ploc, ploc, ploc was bounding down the steps, which is always dangerous. Never leap down the stairs, especially if the bark is not yet hard enough.

The steps, by the way, were on the bench of a football field, where the audience shouted GOOLO! when he saw the cheese jump into the goal.

It was the goalkeeper who was damned, for consenting to that “chicken”, which, after all, was even a cheese. And then he gave him a huge kick that threw him into the clouds just as the crowd was screaming GOOLO !, because this time, the real soccer ball of the challenge had entered the goal under the guard netting, distracted by the ball that was not …

It sounds a bit confusing, but I think you get it.

The one who didn’t realize it was the pilot of a supersonic plane, one of those who scribbles in the sky, that no one can read. When he saw a Flemish cheese almost brushing its wing, the pilot drew a number of question marks in the air: Is it a satellite? Will I have climbed too much? Or drunk? Is it really a cheese? Or a mirage? Or a cheese mirage? So why isn’t it a bread and cheese mirage?

At least she decided to go back to the base, suspecting that his illness was starvation.

If the cheese had not, however, remembered the law of gravity, by this time astronomers, who point their telescopes at the stars, were discovering a new planet. A cheese planet, why not?

Why not or why yes, the Flemish cheese fell.

He fell into a garden, where a famous striker, so famous that I don’t even have to say his name (even because I don’t remember …), where this footballer played with his son.

The footballer, assuming the cheese was the ball, gave him a brave kick. On account of this new impulse, the cheese made a big bow in the air and went to have … guess where?

He went to the Flemish cheese tree where he had started from when this story began.

It is natural that it has been detached again, but for now it is enough. If he had a vote in the matter, and the fluffy Flemish cheese would say the same. António Toasted www.historiadodia.pt