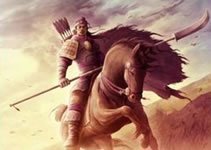 Upright in his steed, the Great Warrior rode at a gallop when suddenly the snow began to fall and cover everything with a thick white cloak.

In this distant and lonely place, he saw no place to take shelter. Only the Dark Cave could be a safe haven. So the Great Warrior got off his horse, arrested the animal, and immediately entered the Cave.

How huge and dark was that cave! So dark that at first the Great Warrior was completely blind. But his eyes grew accustomed to the darkness and he found himself in a very spacious place. He picked up a few dry branches and made a good fire. Rubbing his hands, he then felt caressed by the fire. He sharpened his sword over and over and sucked several dried herring to his spines.

At one point he rose and, as he poured more wood into the fire, saw a terrifying shadow rise from the rocks. What a tremendous fright it has caught! The Great Warrior soon stood guard. He who had hitherto won every battle drew his sharp sword and defied:

– O filthy creature! Show me what you’re worth!

Gritting his teeth, the Great Warrior set out to face the shadow. He wielded his sword and felt well protected by the solid armor. The shadow, however, became even more terrifying. The Warrior then released a fierce new cry:

And attacked again. What terrible sword strokes! What sounds and sparks jumped when the metal hit the rocks! For a moment, on the Great Warrior’s face a smile broke out. He was sure he would win this battle too. And ran to the horse in a hurry. So quickly that, tripping over a dry branch, he fell on his stomach and lay with his sword in the air.

Finding himself in such a ridiculous situation, the one who had never lost a battle shouted:

And with a long stick that he had caught from the fire, he began to strike everywhere without mercy and mercy, distributing fearful lashes of fire. With so much impetus and so much anger he did it that he even stripped and threw the armor against the rocks. It fell to the ground and rolled on itself….

The Great Warrior then gave up. No horse, no sword, no armor, nothing, completely naked, no clothes but your own skin! What a great bitterness you felt! What a terrible and terrible humiliation! Eating the dust off the floor! He walked on his knees for quite a while, groping his way out… Very, very hard, his head down and his back well bent…

Until it came upon a warm, fresh light. How much light!

Soft warmth then began to wash over the Great Warrior’s bare skin. He could still see nothing, only felt… But when, after a few moments, his eyes became accustomed to the brightness, he saw that shadow outside again challenging him.

– A thousand rays and streaks!

He looked back into the shadow… but this time he exclaimed:

He returned to the cave and said:

– What a fool I am! Fighting with my shadow!

And there he stood before the fire beside her:

“After all, I am my greatest enemy myself!” What a great idiot!

And he began to move now one foot now a hand, first the neck, then the head … Like a small child.

And so, instead of setting out for new wars, the Great Warrior decided to stay there, in that faraway, lonely place, in the company of his shadow, now no longer as an adversary but rather as a friend and companion.

And as he untied his horse, the sun’s rays began to melt the snow and made that thick white cloak a surprisingly light and transparent blade…. Pello Añorga The Gran Guerrero Vigo: Faktoria K of Libros, 2007 (Translation and Adaptation)