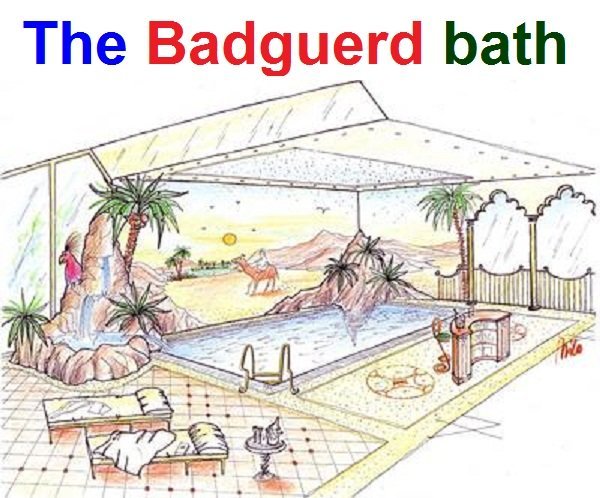 The Queen Housan Banou reigned in Shahabad. It was beautiful and much loved by Prince Mounir, but did not feel able to make the heart glad this man of great value. In fact, more than anything in the world, she wanted it to be unraveled the mystery of a bathing resort called Badguerd, distant abode of infernal reputation. None of which there had ventured had returned.

The prince had a friend Mounir: Hatim Tai. This precious companion, who had a great reputation for bravery and generosity, then decided to get your brother in arms could receive the love of the queen, move, however much it cost, the bathhouse of Badguerd and beat your enigma. Prince Mounir was moved to tears to see Hatim resolved to face, for your happiness, the dangers of such company. Accompanied him to the gates of the city, gave him, the part of the queen, a very powerful talisman to protect from foreseeable dangers, then pressed him in his arms and said goodbye to him.

obscured by dangerous spells that no living man knew his exact situation. Walked seven times seven days with the sun on your shoulders and before his footsteps, the brown desert.

On the last morning of the seventh week, saw in the distance a city of sand, where he arrived at twilight. In front of the upper gate of the citadel found an old man who stretched before him a long stick and, thus stopping him, asked him where he was going.

– None of your kind of crazy today he came back. Did you know this?

– I know little and care – Hatim replied. – I made an oath to discover the secret that hides this place and found him up.

Pointed to the horizon with extended bat.

– Take this path which leads to the citadel of Qa’tam, ruled by a king named Harith. Only he knows where the bathroom Badguerd, but it is an unpredictable man. Gave orders to border guards to arrest as many seek this place. Ignore it sends kill yourself or give them information. To go straight unto Qa’tam, you have to climb a high mountain and cross a vast plain, after which you will face two paths. Take the left. The right is apparently better, but hides more dangers.
Hatim thanked the old man, rested for half a night and again resumed crossing the desert. The morning mists parted logo on a distant mountain and blue cypress populated. Climbed it. Reached the top, found at the foot of the hill an endless plain. And she went down there walked long days as the boots, exhausted, fell to pieces.

Finally reached the place where the path split into two. The right seemed to him less abrupt. Took him, too tired and eager to reach the end of the journey, to remember the wise counsel of the old man had found the door of a forgotten town now, so far it was. Walked an hour without cost. Then suddenly the bushes around cheered, as treacherous animals, he reached for the sharp branches, clung to his clothes. Fought the four days, advancing with great effort and losing too much blood. On the evening of the fourth day arrived, finally, at the entrance of a

gray and pale desert. Depleted forces, sank down on a slab. Mal forehead rested on the arm curve, felt the ground move. Straightened up and saw galloping toward you, in the twilight gloom, monstrous animals, inordinate foxes, lions with serpent head, huge tigers with wolf snout.

“I’m lost,” Hatim said to himself, shaking with fear. He got up, determined to die standing. Then the old man appeared at his side and said:

– Young, this is what it costs to despise the words of the wise. Cast out this talisman that Queen Housan Banou offered you and Allah’s will be done. Hatim obeyed. The old man vanished like a vapor. At this time, the earth became yellow and then black, green, red. The monsters, crazed by this prodigy, threw themselves to each other and devoured them with scary noises.

Hatim went on the trip, hoping to overcome the most serious dangers. Fooling himself. Shortly thereafter, entered a forest whose trees and bushes were cutting iron. How long walked under its light gray? Did not know. Came out of it leaner than a specter, dressed in bloody tatters; still walked for long days hunched backs, but finally arrived near the walls of Qa’tam.

In the market town bought new clothes, sent to wash the wounds and perfumed himself. Thus refreshed, he presented himself in the king’s palace as a merchant Harith coming from Shahabad and made ​​it known that he wished to surrender to the Prince, the Queen of Housan Banou, two diamonds, two rubies and two pearls that brought in the bag. King Harith received him very cordially and invited him to spend time with him. Had not spent the first day, as the king, seduced by the spirit of nobility and Hatim, esteemed as a close relative. Shortly afterwards, they were so connected by friendship, that one day the king Harith said to his brother:

– Why not ask me anything when I feel a great desire to please you? Makes a vote, please swear by Allah and serve it at once.

– With your permission and your help – replied Hatim – desire to go to the bathroom Badguerd.

Harith turned pale and his face was creased with torment.

– You are crazy! Nobody ever returned from there. That reckless oath made ​​before thee. Now here I am forced to satisfy you, for my and your unhappiness.

Seeing disgusted and indecisive king, told him his name and told him eloquently why noble cause had set the path. Then the king Harith kissed him, gave him a letter to the head of the bath guards, whose name was Saman Idrak, and offered him the best horse of his stables.

After seven more days of riding, Hatim reached the border where they were Idrak Saman and his guards. Saman led him to a door planted in the middle of the plain between two walls of fog. Was so high that the top was lost in the mists.

– Here is the entrance to the bathroom Badguerd – told him. – If transpuseres, die. Are you tired of living? By Allah, I beg you to give back half is still time.

Hatim advanced. On the door was this inscription, almost erased by the winds and sands, “This house, built by order of King Gayomar, is delighted. . Those who fall under your spell here will forever be a prisoner »Hatim read it and said to himself,” then this is the secret of Badguerd. The Queen Housan Banou not want to know anything else. I have not, therefore, any more reasonable to go further reason. However, I feel that I will not unraveled the real mystery of this place and its dangerous spells were not given to me to know. “Boldly transposed the entrance, thinking enter into any palace, but before him there was no more than an endless desert . Turned. The door was gone. To the bottom of the four horizons, undulating waves of sand.

It was randomly. After a day of walking, he saw a young man came to meet him, bringing a mirror held out to the traveler as soon as it came along. Hatim examined her face and then asked if it was unknown to the barber bath.

Hatim then asked him what he was doing in the desert. Said he had come forward to guide and serve. Left, then, and walked together until, around a large dune, a huge building that ended in a dome

– Here is the bath Badguerd – said the barber.

Entered by a low door. In the center was a pool of hot water. Hatim, looking around, she realized that the door after closed disappeared. Undressed and went down to the water. At that moment echoed a bang

scary. The lights went out. Hatim felt up around himself a bubbly wave. He struggled furiously and darkness, little by little, dissipated. The raging waves seemed to appear from the walls, where, however, there was no opening. The water quickly reached the top of the dome. Hatim, swaying like a fetus, tried to hold on to the key vault. At the exact moment the hand touched, a terrible clap of thunder deafened him. Thought to be dying, but it was seen almost immediately surrounded by the breeze and the sun. Was again in the middle of the desert.

Resumed its risky path, and after three days and three nights of walking, came before a gate ajar.

Entered and found himself in an orchard of young foliage and branches laden with fruit. At the heart of the orchard, vegetables in florida, ran a source. Ate and drank with pleasure, but it was not dessedentado not satiated, however: each fruit whetted his hunger and water caused him thirsty. I knew then that this place was actually the most cruel Hell in the world and left it, her heart gnawed with rage and pain.

Beyond the trees, he saw a palace. Approached him and found it populated by stone statues. Above the door were inscribed these words: “Servant of God had come this far, you know by now that this address is bewitched. The king discovered Gayomar old, returning from war, a diamond such that no one had ever seen anything so bright nor so prodigious size. For that perfect stone to stay under the lusts of the world, created around the bath and Badguerd their enchantments. In the center of the palace is a parrot and a throne of gold, a bow and three arrows. If you want to get out of here alive, kill the bird. If not atingires, shalt be turned into a statue of stone. ”

Hatim Tai transposed entry, advanced towards the throne of gold through a bright room floor and grabbed the gun and offered the arrows. The parrot flew under the dome. Extended the bow and shot promptly. The parrot with a live blow wings, avoided death. Hatim felt suddenly turned to stone from the feet to the knees. “Any hope going forward is forbidden me,” he said, with tears in his eyes. «Never atingirei this infernal animal ‘. He took the second arrow, applied to the bowstring notch the arrow and pointed it at the bird with extreme care. The javelin touched lightly in the feathers and lost. Body felt even heavier. Even the trunk was now stone. He lowered his head and mumbled a dying breath:

– Allah is great, He protects me!

He closed his eyes and shot, by the grace of God, the last arrow. With a sound of thunder, the vault was opened. The parrot, pierced, fell, whirling like a dead leaf. A blinding cloud of dust rose from the ground, put out the bird, the bow and arrows, the golden throne, the palace.

Then the fog did a whirlwind and turned away to heaven. Recovered peace, Hatim found their feet a wonderful diamond. Fell to his knees and grabbed him in the shell of his hands together, while the petrified heroes who had tried before him the prodigious achievement resumed life, came to put up around them and blessed for his release. At the bottom of the plain where they were, appeared to them suddenly the sound of screams and exalted mounts. Saman Idrak recognized and their guards. After kissing, Hatim Tai told them their adventure together and returned to the city.