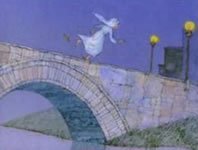 Once upon a time there was a fisherman whose wife had drowned, leaving him with a daughter named Maha. Near them lived a widow who also had a daughter. Every day the widow would go to the fisherman’s house to take care of Maha and every day would say:

One day Maha asked his father:

– Dad, marry our neighbor. You will no longer have to cook or mend your clothes and I will earn a mother and a sister.

The father made her hair parties and said:

“My little one, I will not remarry.” Stepmothers are often jealous of the children of others.

But the girl kept asking, and after a while the fisherman married her neighbor.

At first it went well, but as time went on the woman saw how much the fisherman loved her daughter. He saw that the child was beautiful and intelligent, while his own daughter was pale and clumsy. The months went by and Maha was forced to do more and more tasks at home. When his father went away, his stepmother gave him only a few dry dates to eat.

One day as the girl was on her way home with three fish that her stepmother had sent her to fetch from her father’s boat, she heard a voice:

– Poor girl with no luck! Have pity on another unfortunate creature. Spare my life.

The frightened girl set down the basket and found a red fish underneath the others. Amazed, she led him back to the river. When he released him, the fish spoke again:

– Allah says that a gesture of kindness is never without reward. Call me when you want and ask me what you need.

When his father returned home, he asked his wife what had happened to the red fish.

– What? exclaimed the stepmother, fussing with Maha. “You didn’t tell me there was another fish.” You will have to look for it well; If you return without him, you will regret it.

It was already night when the girl set out for the river, scared and hungry.

The fish appeared at the water’s edge.

“My stepmother is angry because I only brought three fish home.” If you come back empty-handed, you’ll hit me.

“In my mouth,” said the fish, “you will find a gold coin.” Give it to her and tell her you sold the fish.

The stepmother was pleased with the coin but no longer liked her stepdaughter.

The years passed and both girls became women.

Although she worked from sun to sun, Maha was more beautiful every day, inside and out. On the other hand, his half sister had become selfish and mean and often made Maha’s life even more difficult. When she was very desperate, Maha went to the river and called the fish, who always helped her.

One day a merchant’s daughter was getting married, and all the women in town gathered before the wedding to sing and watch the bride’s arms and feet painted with henna. It was a moment of great excitement for the married girls, for this was when the boys’ mothers saw them. Who would they choose to marry their children?

The stepmother washed her daughter well and dressed her in the best clothes she could find. Maha was left at home carrying heavy buckets of water and sweeping the floor.

As soon as her mother and daughter left, Maha ran to the river.

– Fish, fish, tell me what to do. Will I be a slave to my stepmother forever?

The fish appeared at the water’s edge.

– What do you want, my daughter?

“I would like to be with the other girls with the bride.” I wanted to sing and laugh and see all those clothes and jewelry.

“And you will see,” said the fish. “And you won’t sit next to the other girls.” You will sit on the cushions in the middle of the room, right next to the bride! But don’t forget to leave the party before your stepmother.

On the riverbank grass appeared a silk dress, a pearl comb, and a pair of golden sandals. Maha washed, put on her dress, put on her sandals, and put the comb in her hair.

When he entered the merchant’s house, the women found him a place right next to the bride. They didn’t know who she was, but they thought she should belong to an important family. Her stepmother and daughter found her very much like her stepdaughter, but they laughed at the thought of the absurdity of the girl in those clothes.

Maha was having so much fun that she forgot to see what time her stepmother left. When the woman got up, the girl slipped out a door and ran home. As he passed a small bridge, he fell and one of the golden sandals fell into the river.

Maha got to her feet and continued running. When the stepmother and stepdaughter arrived home, the girl was dressed in rags again and was sweeping the doorway.

Several days after the festivities, Tariq, the bride’s brother, went horseback riding. At one point, he dismounted and led the horse to drink in the river. Each time the animal lowered its head, it moved away and refused to touch the water.

– What’s up with you? asked the owner.

The boy leaned over and saw something shining in the morning sun. He picked up the object and saw that it was a golden sandal. She was so delicate and beautiful that the young man longed to find his owner.

That night, just poked the food.

– What worries you, my son? asked the mother.

Tariq took the sandal out of his tunic pocket.

“They often say it’s time for me to get married.” Because I want to marry the owner of this sandal. But I don’t know who it is.

The mother was pleased.

The next day the woman went from house to house in the wealthiest part of town, for surely the owner of the sandal would live there. Maybe it was that pretty girl who had been at her daughter’s party. She tried to put on her sandals for all the single girls, but it didn’t fit any.

The next day, he visited other parts of the city, but always in vain.

On the third day, he went to the fishermen’s huts. When Maha’s stepmother saw the merchant’s wife, she stuck her stepdaughter in the bread oven in the courtyard and covered the entrance with a large rock.

Despite all their efforts, however, her daughter’s foot would not enter the sandal. Tariq’s mother was about to leave when the rooster perched in the oven and began to sing with full force.

What you’re looking for is right here.


Tariq’s mother ordered her servant to open the oven. Maha stepped out of her and her foot slipped into the sandal easily. When the merchant’s wife saw the beauty and kindness in the girl’s eyes, she knew she had found a bride worthy of her son.

“Here you have it,” she said to her stepmother, handing her a purse with gold coins. “Your stepdaughter is now engaged to my eldest son.” The bridal procession will pick you up within two days.

Even so, the stepmother did not rejoice in the good fortune of the family. So he went to the perfumer with some coins and asked him to make a perfume that smelled like rotten fish and caused hair loss. On the eve of the wedding, he held his breath as he combed Maha’s beautiful dark hair.

The next day, the procession came to fetch the girl and took her, in a litter, through the streets, between singing and dancing. Tariq waited impatiently for the signing of the nuptial contract so that he could see the bride. When she lifted the veil, a smell of roses invaded the room. Maha’s hair was so beautiful that he kept stroking it.

When Tariq’s brother saw his happiness, he wanted to marry Maha’s half sister. Once again, the stepmother received a bag of gold coins to prepare the wedding.

The woman had seen the effect of the oil on Maha and, on the eve of the wedding, combed her daughter’s hair with the same mixture. The next day, the procession transported the girl through the city streets. However, when the bridegroom lifted the veil, he almost choked on the stench and saw that the bride’s head was blistered instead of hairy. The girl was soon returned to her mother.

As for Maha and Tariq, they were blessed with seven children and lived happily ever after. Rebecca Hickox The Golden Sandal New York, Holiday House, 1998 (Translation and Adaptation)