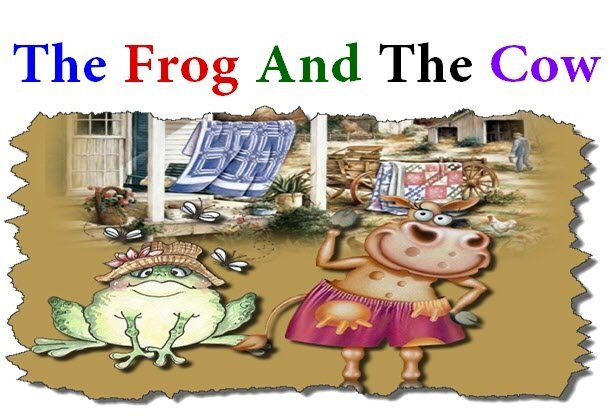 A frog saw a cow. And found beautiful, that cow.
– How she’s fat! – She said. – How big it is! I am very small, most boring thing! Oh, I so wanted to be fat as a cow! Then the frog began to eat as much as I could to see if was fat, fat as a cow!
Sometimes she did not even feel hungry, but ate anyway and spoke to the frog little sister:
– Pay close attention, my sister, tell me if I’m getting fat, tell me if I was as fat as cow!
– Nah! You are not fat as cow.
The frog ate more, and gained enough; hardly could no longer jump.
– And now, I’m as fat as cow?
– Nah! You are not fat as cow. You are much lower. Never in life you will be as fat as cow.
But the frog wanted because I wanted to get as fat as cow. Then he started to eat more grass, more flies, and all the foods found ahead.
And she gained weight. Almost could not even walk anymore.
Had become a fat, fat frog, but not as fat as a cow, and his little sister frog was mocking her.
– You can eat anything you want, that will not do. Never in life you’ll be as fat as cow. You’re a frog, a small frog! Why was invented to get as fat as cow?
But the frog did not care for his sister. Continued eating.
And you know what happened?
She ate too much, got sick and died.
Oh that silly, jealous that frog! Why does not she want to be a small frog?
Frogs are very nice, small like that. . . If they were fat as cows, would be very ugly and could not jump on the lawn and hide under leaves or in the middle of the plants when we try to grab them.