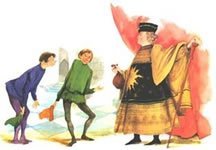 Many years ago there was an emperor who thought that fine new clothes were so important that he spent all his money on them. He didn’t care about his army, or going to the theater, or hunting in the woods, unless it presented an opportunity to show off his new outfits. He had a different fact for every hour of the day, and instead of saying, with regard to the emperor, “He is meeting in council,” it was said, “He is in the dressing room.”

The large city where I lived was very prosperous and visited daily by many people. One day, however, two thieves who claimed to be weavers came to town claiming to make the most beautiful fabric imaginable. Not only were the colors and pattern of the fabric unusually beautiful, they claimed, but the clothes made of it had the wonderful property of being invisible to those who were not competent in their craft or who were particularly stupid.

“These clothes must be really wonderful!” Thought the emperor. “If I had such a garment, I might know who on my land is not competent for the position he occupies.” I could distinguish who is smart and who is stupid! I have to order this fabric for myself right away!

And he gave the two crooks a lot of money to get them to work. So they set up two looms and pretended they were working, but in reality they were doing nothing. They said they needed the finest silk and the most precious gold thread, but they kept it all to themselves and continued to work on the empty looms until dawn.

– How will my fabric look? The emperor wondered.

However, he was slightly afraid when he remembered that anyone who was stupid or incompetent in his job would not be able to see him; He didn’t think he needed to be afraid. In any case, he decided to send someone to see how the work was going on.

All the inhabitants of the city were informed of the marvelous power of the fabric and were eager to find out if their neighbors were smart or stupid.

“I will send my old and honorable minister to pay a visit to the weavers,” the emperor thought. “You’re the best person to see how the fabric looks, because he’s very smart and no one is better than him at work.”

And the honorable old minister went to the room where the two crooks were sitting working on their empty looms.

– God help me! Thought the old minister, his eyes widening. – I can see absolutely nothing! – but shut up.

The two knockers invited him closer. The pattern was not very exquisite? They asked. And the colors weren’t beautiful? As they spoke they pointed to the empty loom, and the poor old minister was still perplexed, unable to see anything, for there was nothing to see.

– My God! He thought. – Am I stupid? I had never thought about it. Well, what is certain is that no one can know about this! Am I not competent in my work? I can never say that I can’t see the fabric!

“You say nothing?” Asked one of the crooks while pretending to continue weaving.

– Oh yeah! It is fabulous! Wonderful! Retorted the old minister, peering through his glasses. – What a pattern! And the colors! Of course I will tell the emperor that I really enjoyed it!

“We’re so glad to hear you say that!” Said the two weavers, then set about talking about the colors and describing the unusual pattern. The old minister listened very carefully so that he could tell the emperor everything later, and so it was.

The two crooks then asked for more money and more silk and gold thread, saying that they needed more materials for weaving. Of course they kept everything for them and continued to weave their looms as empty as before.

Shortly thereafter, the emperor sent another honorable official. He looked, looked, but since there was nothing on the looms, he couldn’t see anything either.

– Is it a nice fabric or not? Both crooks asked and, pretending to be showing it, described the beautiful pattern that, of course, did not exist.

– I’m sure, I’m not stupid! Thought the clerk. – Therefore, I must be incompetent in my craft! This is indeed strange, but I can’t let anyone know!

And so, she complimented the fabric she couldn’t see and mentioned how much she liked the beautiful colors and pretty pattern.

– In fact, it is of exquisite taste! He confirmed to the emperor.

Everyone in town talked about that wonderful fabric, and the emperor wanted to see it with his own eyes while still at the loom. He then paid a visit to the crooks, leading a select party, which included the two honorable gentlemen who had gone there before. The two rogues were spinning with full energy, though there was not a single thread on the loom.

– Don’t you think it’s superb? Asked the minister and the clerk. “Your Majesty, notice only that pattern and those colors!”

And they pointed at the empty loom, as if they believed everyone else could actually see the fabric.

– My God! Thought the emperor. – I can see absolutely nothing! This is terrible! Will I be stupid? Not worth anything as emperor? It was the worst thing that could happen to me!

However, out loud, he just said:

– Oh, yes, it’s very beautiful! I really like him! He shook his head approvingly, looking toward the empty loom. He didn’t want to admit at all that he couldn’t see anything at all. The whole entourage that had come with him looked and looked again, but could see no more than the minister and the clerk had seen, that is, nothing. However, they imitated the emperor and said:

And they advised him to make a suit with that fabric, to wear in the great procession that was to take place soon. And they all exclaimed one after another:

No one failed to comment on how beautiful the fabric was, and the emperor then gave the two crooks medals to hang on his lapel and ordered them Knights of the Loom.

The two shrewd crooks had been standing all night on the eve of the procession, with sixteen lamps on, and everyone could see how they were working hard to get the emperor’s new clothes on time. They pretended to be pulling the fabric off the loom, waved the scissors in the air as if they were cutting, and sewed busyly with needles without thread. Finally, they said:

– See, the clothes are ready!

Then came the emperor himself, with his most distinguished courtiers, and the two crooks raised their arms as if holding on to something.

– Here are the pants! – they said. – And here is the coat! And the cloak! They added, “It’s as light as a feather!” One even thinks that one does not bring anything dressed, but that is the beauty of these clothes!

– No doubt! Agreed all the courtiers, though they could see nothing, for there was nothing to see.

“Do you want your Majesty to finesse your clothes?” Asked the crooks. “So we can put her new clothes in there in front of that big mirror!”

And so the emperor stripped everything and the two crooks pretended to be wearing the new clothes they were supposed to have made, pulling from here, pulling from there, straightening the tail of the robe, while the emperor turned and strutted in front of the mirror.

“What beautiful clothes!” Exclaimed everyone. – How well they fit! And what a pattern! What colors! In fact, it is a sumptuous fact!

“The canopy under which your Majesty will walk in the procession is already outside,” said the emcee.

– I’m ready! Said the emperor. – My clothes really fit me!

And once more he walked around in front of the mirror, pretending to admire the beautiful clothes. The stewards who would hold the tail clumsily groped the floor as if lifting it, then pretended to hold it. They too were afraid that someone would notice that they couldn’t see anything.

And so the emperor walked in procession under the majestic canopy. Everyone in the street and at the window exclaimed:

– Oh! How wonderful are the emperor’s new clothes! What a beautiful cloak he wears over his coat! How good it looks to you!

No one wanted them to think they couldn’t see anything, because that would mean they were either stupid or incompetent in their work. No other emperor’s clothes had ever been so bragged as this one.

– It’s just the voice of innocence! Said the father of the child.

But people began to pass word to each other about what the child had said.

Finally, everyone was screaming:

The emperor was embarrassed, because deep down he thought they were right, but said to himself:

“I have to stand firm until the end of the procession.”

And so he went on, even more excited than before, and the stewards continued to hold on to the tail that did not exist. Tales of Andersen Porto, Ed. AMBAR, 2002 Adaptation