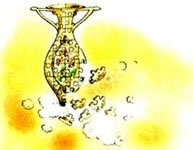 The little jar was broken, that little hand-painted flower jar, so elegant, so graceful that it was the delight of all the people passing by our house.

– It’s been in our family for centuries. It is said to have been offered by a queen of old to an ancestor of ours, ”my tender mother explained, looking at the painted flower jar.

Yeah, but it broke. It broke into innumerable shards that no repair or glue is worth. Who was the fumbling?

“I don’t,” James got away with. – When I got home, the mother was already crying.

My brother James was free from suspicion.

“I didn’t go either,” my father said hurriedly. – When I got home, your mother was already being comforted by James.

“I didn’t go,” my mother whined. “I was so petty in the jar.” When I got home, there was no one here and the jar was already broken into a thousand pieces. It was close to fainting with disgust.

Our Polka Dots cat unrolled with great dignity and said:

– I didn’t go and have nothing to do with it.

And he curled up again and fell asleep. Oh, I wish I could have done the same!

Everyone turned to me.

– You, Marcos? And were you silent?

I sighed deeply and began to tell what had happened. As I counted, I was becoming calmer, without that unbearable burn I don’t even know where – in the stomach? In the heart? in the belly? – that had made me run from home to the stairs, from the stairs to the street, as if I had set the building on fire. Or to myself.

It had been unlucky. It is always unlucky. To plug the recorder into the wall socket, I had to move the shelf a little bit. I didn’t expect it to be so heavy. As the bookcase tilted, the books slipped. I rushed over them to avoid the collapse. Not measuring the gestures, I bumped into a small table that shook the exhibitor where the jug was. Saxe’s dolls shuddered and cups of coffee bounced on their saucers … The little jaw, like the shell of an egg, broke. I think she was waiting a long time to leave. Any shudder would give him the pretext. I gave it. It was my fault.

I said this with such a deep, regretful air that the accusing circle around me had cleared and vanished on its own. My mother, sighing, went to sweep the glass from the jar into a box, in the illusion that perhaps it could still be restored, James gave me a cool wink, and my father, before diving in. in the newspaper, confided to me:

– You know, the jar was really broken. Some time ago, in the hubbub of a kitten game, which was still a kitten, the jar cracked. That is, I cracked it … Since I was home alone, I had time to fix it as best I could, so as not to upset your mother. But in fact the jar was already broken.

I wasn’t expecting that one.

“You had a lot of courage to confess,” my father continued. “From here to dinner, when we’re all together, I’m going to need the courage.” And sorry …

My father opened the long pages of the newspaper in front of him, I don’t know if to read them, to hide his face from embarrassment. It also takes courage to apologize.