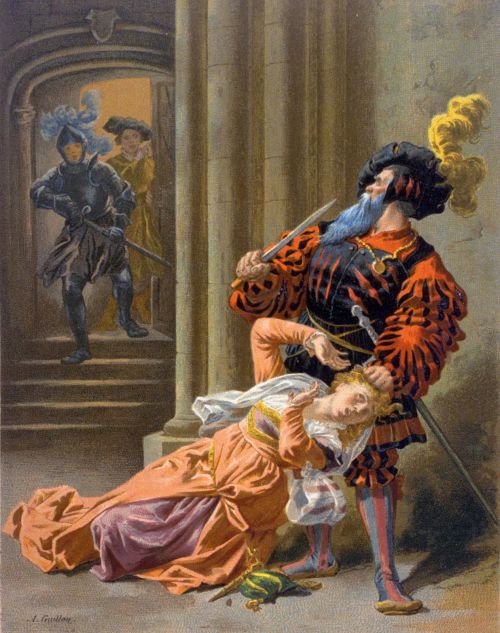 The Bluebeard story is an old one from England. In the 1920s, an aristocrat named James Watson went on a murder spree, stealing many women. To lure women, he used personal ads and exaggerated personal descriptions. While traveling for business, he used different aliases. Sometimes he was a banker; sometimes, he was a federal agent. He even lived a life of polygamy.

Once upon a time, there was a very rich man who lived in a  very beautiful mansion. He had such a bright blue beard that all who knew him called him Bluebeard. Probably because of his uncommon beard, this man was so very popular that he had been married several times. Yet it so happened that each one of his wives had mysteriously disappeared and no one knew what had happened. Near Bluebeard’s house lived a poor widow who had four children, two son and two daughters. Bluebeard wanted to marry one of them.

Both of them didn’t want to marry his as they knew about the incident. Because of his polite way of talking, they both were impressed. Bluebeard invited them along with their family to come and live at his mansion for a week so that he could know them more. At the end of the week, he got married to the elder daughter amongst them.

After a month of their wedding, he told his wife that he was going away on a business trip for few weeks. “While I am gone, invite your family. Here are the keys to all the rooms. You may use all the keys to unlock all the rooms except for the little key!”he said. That door was not allowed to be opened by anyone and he left. Everyone came to the mansion and had a wonderful time.

His wife was very curious to know about that door. After a week’s time, she could no longer control herself and she opened the forbidden door. She could not believe her eyes. Inside the room, she saw all the Bluebeard’s wives who had turned into stone statues. She stood there in shock and then slamming the door behind her, she ran to her room shaken and trembling.

She looked at the small key in her hand. The key had the tiny stain of blood on it. She was sure that the stain was not there before. She tried every possible way to clean the key, with the handkerchief, she tried to wash it with the soap, polished it, but nothing worked. She realized that it was a magical key and Bluebeard would come to know about everything. Bluebeard came just after two days and asked for the keys. She returned the key with hesitation.

“What is this stain I see? You have open the door! Now you too will turn into the stone.” The poor girl began to cry and pleaded with the Bluebeard to reconsider. But he would not change his mind. “Please give me some time to prepare myself,” she begged. “You have less than an hour!” he replied.

She wanted to increase the time as her brothers, who were the soldiers were about to reach the mansion. Unfortunately, the time passed much too swiftly and he began to cast the magical spell that would turn his wife into a stone. She fell onto her knees and started crying out loud.

Just then, both her brothers burst into the room. They grabbed Bluebeard, tied him up and he was taken to the prison, never to be seen again. The beautiful girl, thus, inherited all of Bluebeard’s fortune. After one year, she got married to a handsome boy. This time, she was married to a good and honest man who helped her forget that terrible adventure. She lived happily ever after.

Here is a short visual depiction of this short story, “Bluebeard“. See the video story below,