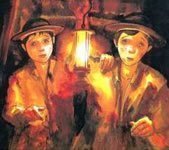 – Be careful when you leave. The ground is slippery, ”the professor warned as he opened the heavy door.

Despite the warning, the students had a hard time resisting a small run, especially since they had been sitting all morning. A chase began, a punch skidded on the thin ice, and the joke ended in laughter.

Of all the students, only two did not share the prevailing mood.

– Louis and Tounet! Exclaimed the teacher. – What are you doing here? Classes are already over.

“We wanted to say goodbye to you,” Tounet murmured.

“Yes, we did,” Louis confirmed. “Tomorrow we get down and we won’t be able to go back.”

The teacher’s face changed and a deep sadness invaded his eyes.

“I had already forgotten,” he said.

He was silent for a moment, then slowly shook hands with each of the boys.

That winter night, Louis and Tounet left school forever. The next day, they would go down to the mine. The mine swallowed every child ten years old. That was the rule, both in Saint-Etienne and throughout France. The two boys stopped to greet the Tambour horse for the last time. Whether it was rain or shine, the animal always waited for them behind the fence.

After their farewell, they shook their homes on the outskirts of the city.

The next morning at five o’clock the miners left for work. Five faced the night and the icy wind: Louis and his cousin Emile, accompanied by Tounet, his father Isidore, and his brother Charles.

– Here we are! Muttered Isidore after a long minute of walking.

The mine’s facilities slowly emerged before the eyes of the group. Among a set of tents, chimneys and railroad tracks, the silhouettes of two pontoons were distinguished. They were built vertically from the wells and supported the lift cables.

Each well had a name. Louis and Tounet would work at Châtelus # 1. The wooden structure stood proudly by the railroad leading to Firminy. At the entrance of the pontoon began a whole maze of buildings and passageways.

But they arrived without problems to the place where each one received his lamp. Charles repeated the warnings:

– Never raise the grill of your lamp! If the flame turns bluish and increases, it is a sign of grisu.

Grisu, an explosive gas released by coal, was always the source of several accidents. Three years earlier, for example, it had killed 70 people at the Jabin well east of the city. To prevent explosions, the lamps were equipped with a thin metal grate that prevented the grisu in the mine from igniting. Hence Charles’s warning.

Suddenly, unaware, they were already in front of the elevator, waiting for one of the cabs to go up. The cables paraded at full speed. There was a sound of thunder somewhere.

– Are you afraid? Tounet asked Louis.

“Me neither,” said the boy.

But despite the effort to appear calm, they were both very pale.

Amid a clatter of hardware, a cabin emerged from the pit to take them to the bottom of the mine. No sooner had they set in, the door slammed shut. Suddenly, as if the ground slipped underfoot, the cabin slammed down with incredible speed. The two boys had the impression that their stomachs would come out of their mouths.

A scorching wind struck their faces. They were shaken violently: from left to right, front to back, against the bars, against the legs of the miners. The emptiness opened beneath them and Louis thought he was going to faint. Then the cab slammed shut and came to a halt.

They finally saw the mine they had heard so much about. In front of them was a room from which two galleries departed.

– Play to walk! We are not here to see the scenery! Said Charles.

The teams broke up. Louis went with Emile to the yard while Tounet accompanied his brother to the stables.

The team led by Emile crossed dozens of galleries, plunging deeper into the heart of the earth. When he arrived at the shipyard, Emile said:

– Is here! The ceiling is almost collapsing. We have to replace the whole wood within ten meters.

Louis was tasked with transporting the boards from the warehouse a few dozen yards away. The temperature was unbearable and the boy already missed the icy wind outside. Around noon, the lean meal they had taken was welcome. The miners told stories such as the horse that had been drunk with the palfrey’s wine or that of the miner who swore to find Beelzebub in a Ricamarie mine.

After the meal and the joke, the work resumed in the midst of impressive humidity. Around four in the afternoon, the return to the surface began. Louis found Tounet again, who had been tasked with driving one of the mine’s horses.

“My horse is called Apollo,” he said proudly.

The two friends had a thousand things to tell each other after this first day. Back home, they showered, the last task of a miner’s journey. But Louis knew from seeing other miners that coal dust wouldn’t come out with just a shower…

The two children got off well in the first weeks of work. However, an incident between Louis and Ratel, one of those in charge of the mine, spoiled the good atmosphere. By maneuvering an overweight trunk, Louis accidentally injured the foreman on one knee.

– Asshole! Shouted the man. – You don’t even see what you do!

– Is that your cousin? So I get you two francs for not teaching him to respect his superiors. You – continued, talking to Louis – come with me. I have a great job for an idiot of your style.

Louis went to push wagons in the west sector of the mine, an area where the galleries were old, confusing and dangerous. The miners called this sector “Hell”. While pushing a wagon loaded with more than a hundred pounds of coal, Louis was trying to find a footing on the muddy ground. His job was to drive the carriages from the coal extraction site to the main gallery. Here the wagons were hitched to form small trains that would be pulled by horses into the cabin.

“Hell” lived up to its name: it breathed very hard and the heat was stronger than anywhere else in the mine. On top of that, the place was reputed to be full of grisu, due to the charcoal characteristics there. The miners were very careful with the lamps and respected all safety rules, so as not to endanger their life and that of their working comrades.

One day at the time of departure, Louis and Tounet were attracted by a neigh. A horse was going down to the bottom of the mine. As they approached him, they recognized Tambour, the friend who always greeted them on their way to school.

– The animal is too nervous. We never tied him again.

Without saying a word, Tounet knelt beside the horse and whispered a few words in his ear.

After a few minutes, he told the speaker:

Indeed, and to everyone’s surprise, the animal had stopped neighing and now seemed calm. He let himself bind without nervousness, and soon descended into the well, traveling inside the cabin. Tambour left the surface forever. I would never see the light of day again…
CONTINUED … Fabien Grégoire The Miners of the Mine Paris, The Museum of the Loisirs, 2003 (Translation and Adaptation) [ 19459004]