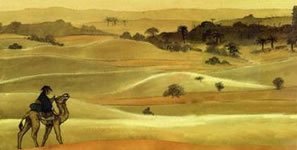 “Mother, I’m not a child anymore,” said Akli. “I want to get my sword from Uncle’s house in the city.”

– You’re too young, son. To get to the city, you have to cross the desert. If you go alone, you risk finding the Kel Essuf, those evil and hideous geniuses like monsters.

“But I’m not afraid of them,” Akli objected.

Since his father was not home and his mother had not forbidden him to go, Akli decided to set out. He then sought out Abdallâh, a Bedouin who knew all the rails.

“Will you take me to my uncle, Abdallah?” I want to go get my sword.

“You’re too young to have a sword and you don’t even have a coin to give me.” Get going!

Akli was not discouraged and asked a camel:

– Azumar, take me to the city, since you like to travel so much.

“I will give you a silver saddle,” Akli promised.

Hearing these words, Azumar was overjoyed and accepted the boy’s offer, which he thought to himself: “What a goofy camel! He really believed I will give him a silver saddle. How easy it is to deceive him.”

When they had been traveling for three hours, Akli spotted a genius. It was dark as burnt wood and threatened:

“Either give me a drink or I won’t let you pass!”

Akli only had one water canteen. I couldn’t give it to genius. So you had an idea. He began to sing the saddest song he knew. Hearing it, the monster began to cry. Soon he was crying so hard that he drank all his tears and eventually let the boy pass.

“As you see, Azumar,” said Akli some time later, “I am already a man.” I was not afraid. I am the great prince of the desert.

The sand moved. Another genius advanced, the size of a cloud.

“Either you make me laugh or I don’t let you pass!”

Akli was disturbed. I didn’t know any story that made a genius laugh. He seemed to get angry. Then the camel approached him and began to lick his toes. The genius burst out laughing and let them pass.

A little farther on, another genius approached, larger than a dune.

“Either you’re scared or I won’t let you pass!”

Akli was disturbed again. He knew no story that frightened a genius. The camel approached the monster and turned its back to him. Suddenly he blew out a huge amount of air from his rear, which sounded like a shotgun blast.

The terrified genius screamed and let them pass.

“It’s the second time I’ve saved you,” said Azumar some time later. I think I deserve my silver saddle well.

– Of course you deserve it. You’re like a brother to me, ”Akli replied, throwing her parties.

– Look! We did it! We have reached the city.

Akli had never seen such a big city with so many things to buy. He had two small coins in his pocket, and with them he bought a large honey cake for himself and a smaller one for the camel.

– What about my silver saddle? Asked Azumar.

While eating the cake, the boy thought: “Let him dream. It is so easy to fool him.”

Akli went to visit his uncle, who was surprised to see him.

“Did your parents let you travel alone in the desert at your age?” He asked her.

– Let. In my village everyone knows that I am already a man.

Uncle then gave him a beautiful sword, adorned with two sky-blue stones.

That very night, lying on a mat, Akli fell asleep peacefully, his sword pressed against him. Azumar slept outdoors, tied to a rope, but was not sad.

“I’m sure to receive my saddle tomorrow,” he thought, closing his eyes sweetly.

The next day Akli thanked his uncle for his hospitality and offering, and rode Azumar. In the desert, the wind blew on and on, and Akli had fun trimming the grains of sand with his sword.

Suddenly a sandstorm arose. The geniuses had been hiding because they are always terrified of the wind. How would they go and find the trail in the sand? But Azumar was strong and brave. He did not falter and went determinedly forward.

“I think I deserve my silver saddle well,” he shouted to Akli through the gusts of wind.

At night the boy arrived at the camp.

– Thank you, Azumar. I would give you a silver moon if I could. Bye! – fired up.

And ran away, ashamed.

It disappeared so quickly that the camel didn’t even have time to reply.

Akli ran toward the tent to show his sword to his father and the other men.

The father smiled at him. He poured him tea and asked him to tell the trip. Akli related everything that had happened and the men listened attentively. When the report ended, his father said to him:

– I’m proud of you, son. You deserved your sword well. Come closer, I want to give you a gift.

His father offered him a saddle, whiter and brighter than the moon. Akli was surprised by the gift, but soon understood the meaning of his father’s gesture. He left the tent and went to saddle the saddle on the back of Azumar, who had fallen asleep in the meantime. Carl Norac Akli-Prince of the Desert Paris, L’ecole des loisirs, 2006