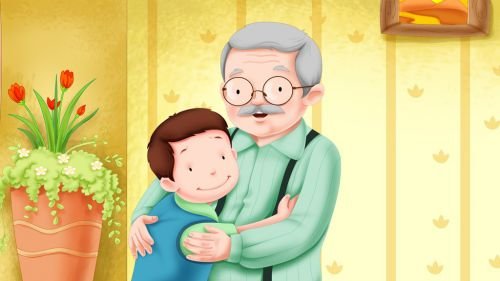 This is one of the amazing brothers grimm fairy tales for kids. “Pap!” Trevor’s mom yelled. “Look what you have done. My new table cloth is ruined!” Trevor looked at his Grandpa. The old man’s hand shook and he hung his head in shame. A few drops of bright orange soup dribbled out of his mouth and down his chin. “I can’t take this anymore,” the angry woman told her husband. “He’s ruining everything!”. More awesome Grimm’s Fairy Tales.

The next morning at the breakfast, Trevor’s grandpa was not sitting with the family at the table. “Where’s grandpa?” Trevor asked. Turning his head, he saw him sitting in the corner. Grandpa’s meal bowl of oatmeal was on a tray table in front of him. He seemed to be shaking more than ever.

Travor picked up his own breakfast and went to join his grandpa. “Get back here Trevor,” his mother said. “Sit at the table and eat your breakfast with the family”,”But I want to eat with grandpa,” he said. “Sit down!” his mother repeated. Trevor obeyed his mother and ate the oatmeal in silence. When his mother passed a dish with his favorite pastry on it, he pushed it away. “May I be excused?” she asked.

CRASH! Everyone turned to look. The tray table was on its side and the bowl was broken. Oatmeal was splattered everywhere. “Not another broken bowl,” Trevor’s mother cried. “That’s it! We have to buy plastic bowls for you,” she screamed at her father-in-law. “Act like a baby and we’ll treat you like one!”

One evening before dinner, Trevor’s father saw his little boy sitting on his bed with a small pile of coins. His piggy bank was empty. “What are you doing?” his father asked. “Counting my money!” Trevor said. “What for?” asked his father. “I need to see if I have enough money to buy some plastic dishes!” he replied.

His mother peeked her head in the door. “What for?” she asked. “I need to start buying plastic dishes for you and Daddy, so when you’re old, you won’t break any of my dishes. I don’t want you to ruin my things when I grow up!” the boy said to his parents.

Trevor’s mother looked at his father and started to cry. She ran out of the room and down the hall to her father-in-law’s room, walked over to him and kissed him on the cheek. She said, “I’m so sorry for the way I’ve treated you. Pap. Will you forgive me?” A tear spilled out across the old man’s cheek. “Come!” she said to him reaching out her hand for his. “Dinner’s ready!”

That night, the family ate together at the dining room table and every meal after that. Everyone ate from the good china and when Grandpa spilled something on the table cloth, instead of yelling at him, Trevor’s mother simply wiped it up and smiled. You may also like, Rumpelstiltskin Story.

Trevor’s parents didn’t realise how badly they were treating his grandpa. Now, as Trevor planned to treat them the same way, suddenly they understood.

Moral : We should treat people the way we want to be treated.

Here is a visual depiction of one of the amazing brothers grimm fairy tales for kids, “The Old Man And His Grandson”. See the video story below,