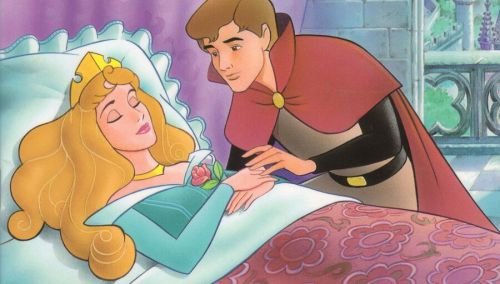 This is the Sleeping Beauty Short Story. Once upon a time, a beautiful girl was born to the king and queen in a faraway land. Fairies from all over were invited to the celebrations. They brought with them unique gifts and blessed the little princess to become a clever, beautiful, and kind girl.

Just then, a wicked old fairy came to the palace and cursed the princess, “On your sixteenth birthday, you’ll touch a spindle and die,” she screamed in anger and vanished. Everybody was shocked—more about Sleeping Beauty.

A young fairy was called into the palace. She said, “I can’t take the evil witch’s curse, but I’ll try to help. When the princess touches spindle, she’ll not die but will instead fall into a deep sleep and will only be awakened with a kiss of a prince who loves her.”

The king and the queen were so worried for their dear daughter that they ordered all the spinning wheels of the kingdom to be destroyed forever. However, unknown to them, one spinning wheel was still left.

As the years went by, the baby grew to be a lovely, charming young girl. On her sixteenth birthday, when she was roaming about the castle, she came upon a secret room at the very top of the castle towers. Curious, she wanted to help an old woman bent over a spinning wheel.

“Oh! What is this?” she cried as she had never seen it before. She pleaded with the woman, “Please do let me try this as well.” But the minute she touched the needle of the spindle, she fell to the ground. The witch’s spell comes true. You may also like Ariel Mermaid Bedtime Story.

The king ordered her to be taken to the grand room with a heavy heart, where she would lie for many years. The whole kingdom was sad for sleeping beauty. The youngest fairy watched all of this, and she said with a wave of her hand, “Let the whole kingdom fall asleep with the princess so when is woken by her prince, she will not be alone.” The moment she said all this, all the people and animals in the kingdom fell asleep where they were. Everything stopped.

As the years passed by, a thick forest grew around the palace, and the kingdom was hidden. A hundred years later, a handsome prince passed through the forest, and he discovered the strange kingdom.

While exploring it, he was surprised to find the sleeping beauty lying fast asleep and immediately fell in love with her. “I want to know who she is? How gentle and peaceful she looks!” he said. He leaned down and kissed her. Instantly, the spell was lifted, the princess and all the people awoke. It was joy and celebration all around. The prince and princess were soon married, and they lived happily ever after. Also read, Frozen Elsa Story.

Here is a short visual depiction of one of the most famous short stories for kids – “The Sleeping Beauty Short Story. “ See the video story below,

What is the original story of Sleeping Beauty?

The narrative of Sleeping Beauty was based on Charles Perrault’s fairy tale “La Belle Au Bois Dormant,” which was published in 1697. This story was also the source for The Briar Rose, a Brothers Grimm tale published in 1812.

What is the moral lesson of Sleeping Beauty?

The lesson of Sleeping Beauty is that life and growing up come with risks that you can’t avoid no matter how hard you try, and that love conquers all. This story’s moral is to obey your parents. They are kind to their children and always consider what is best for them.

What is the real story of Beauty and the Beast?

The true “Beast” was a guy named Petrus Gonsalvus, who suffered from hypertrichosis (also known as Ambras syndrome), a hereditary disorder characterized by excessive hair growth on any area of the body in comparison to that seen in people of the same race, age, and gender.