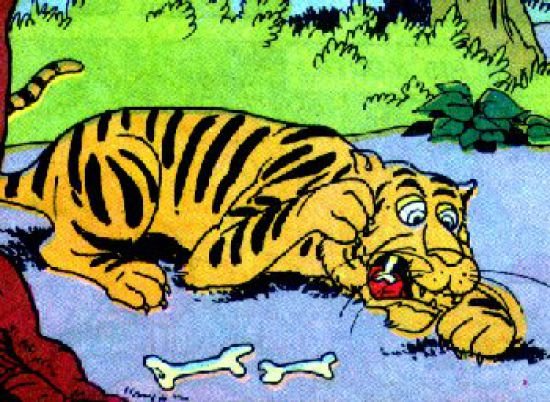 This is an amazing Tiger Story In English for kids. Once upon a time, there lived a tiger in a jungle. One day, the tiger ventured out of his cave and went looking for a prey.

Soon, he found a suitable prey and began munching away. As the tiger was enjoying his meal, a tiny bone got stuck in his jaw. He coughed, he tried to use his paws to get the bone out. As much as he tried, it bore no fruit. A tiny bone brought tears in the mighty tiger’s eyes. Also, read The Tiger’s Stripes.

tiger story in english
Image Source–> www.hindukids.org. Days passed, and the tiger could not get the bone out. “I am sure I will die of starvation,” the tiger thought, “I have to get this bone out.” He knew he had to get the bone out of his throat. But he knew not how!

As the days went by, the poor tiger got weaker and weaker still. He had no idea what to do. All he could do was wait for his death to come. Then, one day when the tiger was miserably lying under a tree, he saw a tiny woodpecker nearby. The woodpecker took notice of the tiger’s discomfort. “Is something wrong?” the woodpecker asked the tiger, “Why do lie there with your mouth open?”
“Oh, it is nothing,” the tiger replied lethargically, “a bone got stuck between my teeth a few days ago. Ever since then I haven’t been able to eat properly. I am sure I will die of starvation because of this.” The woodpecker then says he would help the tiger. “I will remove the bone only on one condition. You shall give me share of flesh off the animals you kill from this point onwards.” You may also like to read, The Tiger And The Golden Bangle.
Now, the tiger was desperate. He agreed at once, with no intention of complying with the stated condition. “A measly little bird like you can’t do anything. Why should I share my food with it?” the tiger thought. So, the woodpecker flew down and at once took out the bone relieving the tiger of his pain. The moment the bone was out, the tiger went looking for prey.
A few hours later, the woodpecker found the tiger enjoying his meal. “Have you forgotten about your promise already?” the woodpecker asked angrily. “You should count yourself lucky,” the tiger told the woodpecker. “I could have easily devoured you when you entered my mouth, but I did not. Now go away puny little bird!” The woodpecker became even angrier at this. So, he flew down and angrily pecked at the tiger’s eye.
The tiger roared with pain. “My eye, my eye! You pierced my eye! I won’t forgive you!” screamed the tiger. To which the bird only replied, “But tiger you should count yourself lucky, for I could easily take away the other eye too!”
MORAL OF THE STORY: YOU GET WHAT YOU GIVE.
Here is a visual depiction of this tiger story in English, “The Tiger And The Woodpecker”. See the video story below,
Tiger Story In English Video