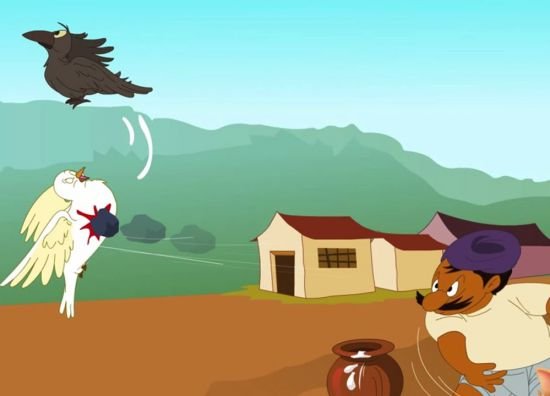 This is one of the best short animal stories for kids to read. Once upon a time, there lived a pigeon and a raven who were friends. They lived on the huge banyan tree on the outskirts of the village in the Southern India.

It was winter time. The two birds were hungry and could not find any food. One night, the raven said, “Friend, let us go to the village. I am sure we will get food there!” The pigeon agreed. Also, read The Lion And The Mosquitoes.

short animal stories for kids
Image Source@ www.youtube.com. And so, the next morning, the two friends set off their journey. On their way, they saw a man carrying a pot full of fresh, thick curd to sell in the market. Their mouths watered and they wished they could have some of it and so they followed the man.

After a while, the man stopped to take some rest under the tree. He put his pot down and laid down beside it. The raven and the pigeon were also tired. And so, they sat on the branches of the tree. The raven looked at the curd and said, “This is our chance! We must eat some curd now!” The pigeon said, “How can we do that, friend?” The raven laughed and said, “It is easy. Just watch me!”
He then swooped down to the pot, filled his beak with curd and flew up again. He loved the taste of the fresh curd and so, he swooped down again and again. Also, read The Lazy Squirrel.
Soon, the man woke up and resumed his journey. The pigeon said, “Don’t try taking any more curd, friend or you will be in trouble.” The raven laughed and said, “Trouble? You are saying this because you have not being able to taste the curd. Go on and taste it! You won’t be able to stop either.” “No, thank you, friend! You have had enough and it’s wrong to steal,” said the pigeon. “The man can’t even see me when I am flying above him,” said the raven.
So, the raven did not listen to pigeon’s warning and continued to eat the curd. Soon, the man reached the market. He put the pot down and was shocked to find the pot half empty. He looked around to see who had stolen his curd and saw the raven with his beak white with curd.
The man shouted, “You wicked raven, I” punish you for stealing my curd.” He picked up a big stone and targeted the raven. The raven dorched the stone but the pigeon could not get away on time. It hit to the poor pigeon and fell to the ground and was badly injured. The raven flew away not bothering to help his friend. The poor pigeon laid in pain and said, “If only I had realized that having friends who are wicked is as harmful as being wicked oneself!”
Here is a short visual depiction of one of the best short animal stories for kids, “The Wicked Raven”. See the video story below,