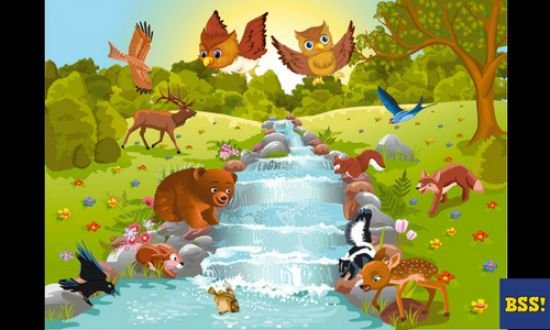 This is one of the cute animal stories for children. This is a story of a large and dense forest called Greenyland. There flowed a river from the middle of the jungle called the Tiber.

Once, during the rainy season, a flood struck the jungle. The whole forest was in the water. The condition was deteriorating day by day. Many animals got drowned, many got killed and many others were still trapped in the deep water. Weeny, the owl was a very wise and helpful animal. He lived on the topmost branch of a large and strong tree. His home was safe from flood. Also, read The Swan And The Owl.

cute animal stories
One morning, he saw from his nest that the whole of the jungle was full of water. He thought, “I must do something to help my friends. They are dying and are in great trouble!” Weeny called his other owl friends and told them about his plan. All the other owls also agreed to save the lives of animals.

They took a large and strong rope and collected some eatables, too. They started flying together in a group over the jungle. Wherever the found animals stuck in the deep water, they pulled them out with the help of the long rope. Animals whose houses were broken or were full of water were provided with the food.
After some days, the water level went down and animals started building their houses again. Weeny and his group again helped the animals in this work. Weeny started teaching the children of animals because their school had also broken down because of the flood. Everyone was praising the owl team for their hard work and great help. You may also like to read, The Wise Old Bird.
King Lion announced that he will give a special bravery award to the owl team and Weeny would be given the title of the “Hero”. Everybody was happy and full of praises for Weeny and his friends and called them “The Heros Of The Jungle“.
MORAL OF THE STORY: ONE SHOULD ALWAYS HELP THOSE WHO ARE IN NEED.