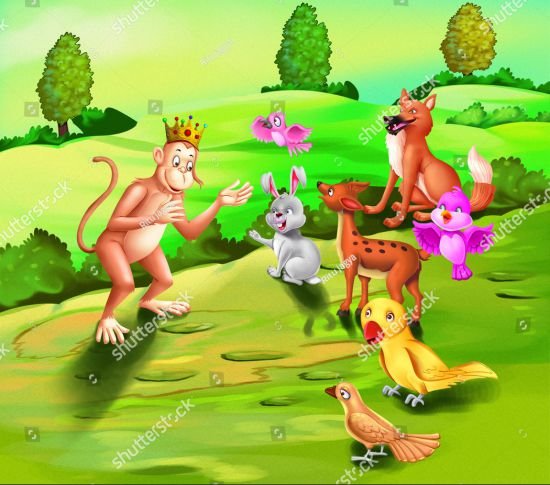 All the animals were carried entirely after their feet with enthusiasm. And, then and there, all of them decided to make the monkey King. The fox did not vote for the monkey and was much disgusted with the animals for electing so unworthy ruler. You may also like to read, Two Cats And A Monkey.

short stories about animals in the jungle
Image Source@ www.shutterstock.com. One day, he found a trap with a bit of meat in it. The fox then got an idea. Hurrying to King monkey and told him that he had found a rich treasure which he had not touched because it belonged to the Majesty, the monkey.

The greedy monkey followed the fox to the trap. As soon as he saw the meat, he grasped eagerly for it. In a couple of seconds, the fox saw that the monkey was fast in the trap. The fox stood off and laughed. The fox then said, “You pretend to be our King and you cannot even take care of yourself!” The monkey bowed down his head in shame. He was really ashamed of what he had done.
All the animals realized that the true leader proves himself by his qualities and not by showing off what he has. Soon, another election among the animals was held. This time, they appointed the true King. It was the Lion, the King of the jungle. Also, read The Sly Fox.
MORAL: PEOPLE WHO CAN’T CONTROL THEMSELVES SHOULD NEVER CONTROL THE PEOPLE AROUND THEM.
Here is a short visual depiction of one of the best short stories about animals in the jungle “The Fox And The Monkey”. See the video story below,
Short Stories About Animals In The Jungle Video