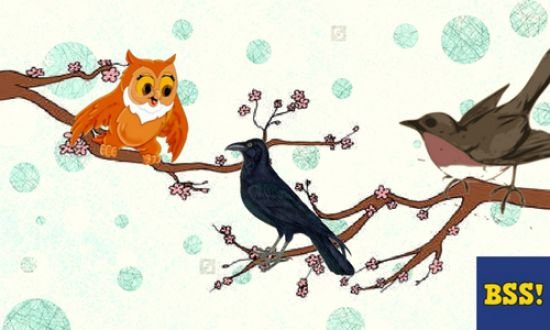 This is one of the best bedtime animal stories for kids. Once upon a time, when the animals could talk, the owl used to be a normal bird. The owl hunted through the day and slept through the night.

Then, one day, as the owl was napping a young boy threw a mud pellet at the owl with a slingshot. Poor owl howled in pain. But his knowledge of medical sciences failed him, and he did not know how to stop the pain. Sometime later, the owl saw his friend crow fly by. You may also like to read, The Swallow And The Crow.

bedtime animal stories
“Crow,” he called. “I have been shot.” The crow descended to the owl’s branch at once. “Do you know how to fix this?” asked the owl. “I am afraid not”, the crow replied honestly. “But I think our friend cuckoo is a doctor, he’d know how to help you. Quickly, let’s go see him.”

So, they flew to cuckoo, who knew exactly what to do. “I have a cure, but I need my payment first,” he said. The owl had nothing at that time so he promised to find cuckoo later and make his payment. After the crow assured that the owl would pay, the cuckoo directed the owl to sit in the river for six hours.
Crow and the owl hurried to the river. There, the owl sat for six hours. And slowly the pellet started to dissolve. And soon, the owl was free of his pain. After getting better the two friends flew back home. Next morning, the cuckoo came to see the owl. “How is our patient doing today?” he asked.
The owl replied that he was fine. Then, when the cuckoo asked for his payment, the owl refused to pay the cuckoo. “I just sat in the water, it had nothing to with you. You knew I was going to take a bath anyway. I won’t pay for something you did not know.”
The cuckoo went to the crow and narrated the incident. “You must be mistaken, the owl isn’t like that. Surely, he must be joking. Let’s go and find out” The crow and the cuckoo went to see the owl, but the owl was nowhere to be found. You see, the owl hid inside the hollow of the tree. Also, read A Wise Old Owl Story.
“We must go to the judge,” the cuckoo said, saddened. The golden jackal was the judge, who passed the judgment in the cuckoo’s favor. “Crow, you’ll pay on the owl’s behalf, as you had assured the cuckoo that the owl would pay. And as for the payment, the law is the law. Cuckoo must be paid for his services.”
Since that day the crow has looked after cuckoo’s eggs as payment and the owl functions at night, in order to not run into the crow and the cuckoo.
MORAL OF BEDTIME ANIMAL STORIES: ALWAYS STAY TRUE TO YOUR PROMISES!