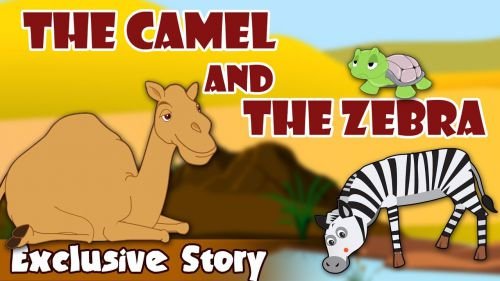 This is the short story in English with moral lesson for kids. Long, long ago, in a jungle far away, there were two unlikely friends, a Camel and a Zebra. The Zebra was proud of its looks and appearance. “Oh dear, the Camel is so ugly,” he thought. “Can we go out and play in the mud, Zebra?” asked the Camel. “No, you go if you want. My black and white coat could get dirty,” replied the Zebra. The Camel did so and sat there for some time. You may also like to read, How The Camel Got His Hump.

Later, in the evening, when Zebra was passing by from the Camel’s house, it asked, “Did I do something wrong Zebra?” “It’s just that I’m very busy, Camel!” replied the Zebra. The Camel could not understand why the Zebra was ignoring him. It felt sad.

short story in english with moral lesson Image Source @www.youtube.com
Many days later, there was a drought. There was no rain in the jungle for the entire season. Everything began to dry up. “Oh no! There is no water!” cried all the birds. “Even the lake has dried up,” said the tortoise sadly.

At some distance, the Zebra found Donkey who was carrying water on its back. The Zebra asked him for water but the donkey denied at once. The Zebra was very disheartened by the tortoise’s words. Soon, he saw his best friend, the Camel. “It’s a drought. There’s no water. I think I will die!” cried Zebra. “Don’t say that! As long as I am there, nothing will happen to you,” the Camel promised to the Zebra.
The Zebra was amazed at how normal Camel was behaving even without water. Just then, Camel told him, “The ugly thing you see on my back is a hump. It stores water. I can live for a month on the water it stores.” The Zebra was surprised by what the Camel told him. Zebra was getting out of breath and wanted to drink water.
The Camel promised to take him to the place which is full of water. To this, the Camel said, “I’m the ship of the desert. I know how to find an oasis.” “What is an oasis?” asked Zebra. “It is the place in the desert that has water, We camel can smell it!” Soon, they left to find an oasis in the desert. Also, read The Zebra And The Giraffe.
On their way, there was a huge dust storm. The Camel quickly told the Zebra to hide under him. He dis so. The dust storm did not affect the Camel. Zebra was again very shocked to see that. The Camel told him, “My ugly long eyelashes help protect my eyes from such dust storms. Also, my skin is pretty thick!”
After some time, Zebra’s feet began to burn because of a hot desert. “Ouch! I can’t walk. The ground is too hot/. Can’t you feel the heat?” he asked. “Not at all! My hard hooves are built for hot desert sand. If you can’t walk, hop on my back. I’ll carry you,” the Camel told Zebra. You may also like to read, The Camel And The Jackal.